FIDELITY BANK NIGERIA PLC: A BRAND THAT KEEPS HER PROMISES ! 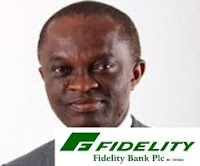 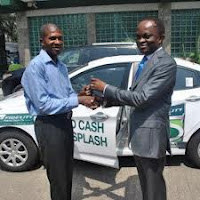 When you consistently give out your word to do this or that to your client, and year in year out, you move mountains to fulfill such pledge, you automatically emerges as a worthy brand, not only before the eyes of those you made promises to, but before the eyes of the entire globe a s a whole-that is what made world renown brands like Coca Cola, McDonald/Kentucky Fried Chicken (KFC), Mercedes Benz, Barclays Bank, British Airways e.t.c what they are today


In Africa, a few couple of entity are also living up to their billings in terms of promises kept, here in West Africa is a fast growing bank called FIDELITY BANK, not long ago, it announced that as part of their 25th anniversary they will give out 25 cars and other cash prizes

It was a plum pledged. And today, the bank has lived to her pledged and has not only fulfilled her pledge, but has successfully changed the lives of many, little wonder; the company’s Managing DIRECTOR and the bank are today fulfilled


According to him, the bank is introducing a gift splash to reward members of the public who open savings accounts with it within the period and those who add money to their existing accounts.


He said the bank was embarking on the savings campaign to encourage savings culture among Nigerians of all ages.


He said, “In an environment like Nigeria where access to funds is minimal, individuals must cultivate the habit of putting something aside for the future. This invariably puts you in a better position to borrow from a bank or other sources than one who does not have savings at all.”


Ihejiahi stated that items  that the bank gave out to the public were 25 Hyundai Accent cars, N25m cash, 250 generator sets, 250 blackberry smart phones.

Fidelity Bank Plc began operations in 1988 as Fidelity Union Merchant Bank Limited. By 1990, it had distinguished itself as the fastest growing merchant bank in the country. However, to leverage the emerging opportunities in the commercial and consumer end of financial services in Nigeria, in 1999, it converted to commercial banking and changed its name to Fidelity Bank Plc. It became a universal bank in February 2001, with a license to offer the entire spectrum of commercial, consumer, corporate and investment banking services. In 2011, the bank was ranked the 7th most capitalized bank in [Nigeria], the 25th most capitalized bank on the African continent and the 567th most capitalized bank in the world.

The bank was established as a merchant bank in 1988. It converted to a commercial bank in 1999, following the issuance of a commercial banking license by the Central Bank of Nigeria, the national banking regulator. The current enlarged Fidelity Bank is the result of the merger with the former FSB International Bank Plc and Manny Bank Plc (under the Fidelity brand name) in December 2005. Fidelity Bank is today ranked amongst the top 10 in the Nigerian banking industry, with presence in all the 36 States as well as major cities and commercial centers of Nigeria. Fidelity continues to rank among Nigeria's most capitalized banks, with tier-one capital of nearly USD 1 Billion (One Billion US Dollars).