Showing posts from August, 2020
Show All

MEN OF VISION ...........Lawan, Dangote , Kalu Tipped As Most Preferred Candidates To Lead Nigeria To The "Promised LAND" Come 2023, by -Foreign Intelligence Agencies

- August 29, 2020
“Great people stand out from others by their visions and not much by their intelligence.” ―  Amit Ray,  Meditation: Insights and Inspirations AT last, the highly revered North American Intelligence Agencies and West Europe Intelligence Agencies have revealed that Senate President, Ahmad Lawan, President of Dangote Group,  Alhaji Aliko Dangote and Chief Whip of the Senate,  Senator Orji Uzor Kalu are the three persons penciled down to rule Nigeria when the tenure of President Muhammadu Buhari ends in 2023,  reports  from the agencies stated. The  report revealed that the consideration of the three was based on their strength,  reliability ,  qualification and national acceptance, adding that one out of the three persons will be the next Nigeria President.  The report also said the trio will slug it out among themselves with consideration of their pedigrees  A similar source from the North American agency disclosed that Dangote’s experience in economy is what Nigeria need going forward
Post a Comment
Read more

SECRETS OF THE RICH @ SUCCESSFUL : Confession of A Billionaire's Daughter ,Cuppy Otedola 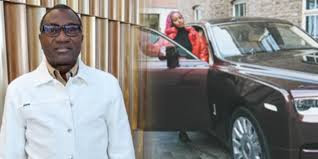 " My father hates to see people suffer, hungry or Ill....My father ,from his youths days under 10 had started making his small money, shinning shoes of VIP who often comes to visit my grand father, Chief Michael Otedola, such money attitudes and love for independence money making took my dad to top of his game and most of his money he gives to needy, such is why I decide to set up Cuppy charity foundation..touch lives of those deeply in need " ~ Words of Cuppy Otedola, as sourced by best selling word Smith & serial humanitarian addict, Czar Mike Cerutti Osagie © CMG • To Subscribe to CERUTTI MEDIA GROUP/their Subsidiary platforms &  To receive alert news/prolific profiles etc/ Adverts Placement, Stories & more, Contact us via Whatsapp: +234 7042631895 email chiefcerrutti@gmail.com ......................Waiting to tell your story√
Post a Comment
Read more

Truth is Sacred! By Mike Cerutti Osagie ( Czar of Letters) The globally revered Advanced Oxford dictionary defined Peace as * Peace is a concept of societal friendship and harmony in the absence of hostility and violence. In a social sense, peace is commonly used to mean a lack of conflict (such as war) and freedom from fear of violence between individuals or groups. ... Peaceful behavior sometimes results from a "peaceful inner disposition."   Such is how one can place the young, visionary Sokoto state Governor, Rt. Hon Aminu Tambuwal, a man who continuously seek peace and virtues of coexistence where ever he goes to We will be shedding more lights on this man shortly and what our Nation & leaders at the top can learn from his philosophical traits   For now. Let's view his quote on peace in his state and compare it to that of iconic Nelson Mandela, Africa's greatest ever politician, role model and selfless leader   • Hear Tambuwal... “
Post a Comment
Read more
More posts