At the World Industry Leaders, we pride ourselves on picking stories of leaders who globally stand out in society, with the aim to inspire our community. We showcase those Leaders who have the courage NOT to give up, and who keep on making waves across the globe.

The stories of these world Leaders, Celebrities, should be an inspiration to us all and to others who are planning on giving up. As we dig into the profile of this personality likened to be an inspiration to so many, we urge you, as esteem readers to pay attention and read carefully.

The person we are talking about here is no other than the adorable Afro-Caribbean-Latina curvaceous Fashion Muse, Master of Iconic Styles, and Music Artiste, “Miss-K”, whose full name is Karina T. Martinez.

Today, The World Industry Leaders Magazine is pleased to bring to you, the latest on one of our Top leading Women, one of the fast-rising female celebrities, who has already gotten herself multiple accolades across borders, won multiple awards, and certainly made giant strides for herself across Africa by being the first international face to model for the Leading Telecommunication Company MTN Nigeria, back in 2010, and who also in the same year, made few exclusive features in several Music Videos while in Lagos, appearing with some of our leading Afro-beat Artists such as Tuface Idebia, Ruggedman and more.

Inclusively, thus far, she has supported several charitable causes around Africa and a decade later, in 2020, she created an empowering initiative to inspire inner confidence, in women and Teenage girls, titled: "The Powerful Beauty K'onference.", where she gathered multiple Award-Winning Women speakers, from all walks of life, under one roof.

Being gifted with inner resilience to succeed, besides all odds, is the very first point that has made "Miss-K" rise to a tremendous height in the entertainment world.

Today, she is making waves in the United Kingdom, adding another arrow to her bow, by keeping on pursuing her dreams, despite all odds, as she unveils a new promo campaign she has been featured in, for London's giant Twin Towers, at the Battersea Power House Station. 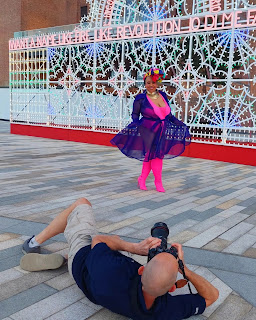 The golden Muse, Miss-K, struck a final triumphant pose that made the cut, as she stood gracefully before the twin towers of Battersea Power Station, showcasing incredible style, wearing multiple colors, with those iconic neon pink high knees boots, that enhance the long legs effect, combined with a see-through mesh coat, wearing nothing but a bathing suit underneath it, which added that extra sass to the look, as she stood right before the electric display, that showcased art designed by Marinella Senatore.
Meanwhile, the advert has been showcased by the Battersea Powerhouse station and also promoted on their online platforms. 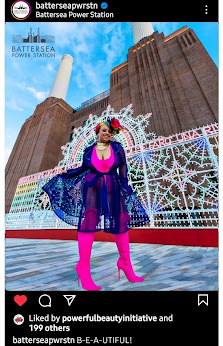 So we've reached out to the Queen Herself and asked for her viewpoint on this incredible good news, and she told us:

" It is only by the grace of God that this spectacular offer came to me, unexpectedly. It was the best birthday gift I could have asked for. So I took the opportunity without hesitations, and I am ever so very proud I did when I see how amazing it turned out. I believe that this historic shot and the results of my hard work, will help pave the way for those who just think of giving up on their dreams and push other girls/women to keep believing in themselves, and I am confident that it will also help break down some of the barriers I have faced on my path to success.

Truth is, in life, our success story is dependent on the level of dedication and hard work irrespective of any damning circumstances we may find ourselves in, rather than allowing what others say about us to affect our focus and weigh us down. It's all about our mindset. Staying focused on achieving our set goals is where it's at."

This fantastic woman has made us understand that despite being trolled, and bullied, over the years, for her iconic quirky fashion style, trendy looks, and unapologetic confidence in showcasing her curves, she is still pushing forward making unpredictable moves.

Check out Miss-K on IG/FB @Missksworld