The Mayak Academy has been named after Andrei Sakharov

The ceremony sponsored by Rosatom, global technological leader, took place in Nizhny Novgorod on November 10, the World Science Day for Peace and Development. This event concluded the celebration of Academician Sakharov’s 100th anniversary.

On the one hand, Sakharov played a role in creating the most devastating weapon in human history, the hydrogen bomb. On the other hand, he was a Nobel Peace Prize winner and a prominent advocate of disarmament and human rights. 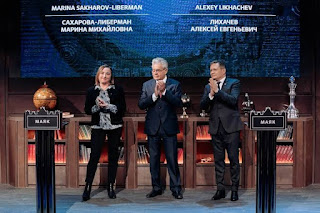 It is only fitting that the Mayak Academy was named after Andrei Sakharov. The building sits in the center of Nizhny Novgorod, at the confluence of the Oka and the Volga rivers. These two great Russian rivers, each unique in its nature, symbolize the duality of Sakharov’s genius and his contradictory aspirations.

In his welcoming address, Russian Academy of Sciences President Alexander Sergeev noted that the idea to name the Mayak Academy after Sakharov was spontaneous. “The initiative was first proposed by Rosatom State Atomic Energy Corporation, and it was immediately approved both by the Anniversary Organizing Committee I am heading and Russian authorities. Andrei Sakharov was undoubtedly a visionary. He had foresight and paved the way to the future. The Mayak Academy also provides a glimpse into the future,” Sergeev said.

Alexey Likhachev, Rosatom Director General, explained the logic behind naming the Academy. “Professor Sakharov left his mark on the greatest scientific discoveries of the 20th century. His research was key to enhancing Russia’s defense and security. It was a breakthrough for the nuclear science and a boost for the Soviet nuclear program. We proposed to name Rosatom’s new training and cultural center in Nizhny Novgorod – the Mayak Academy – after Andrei Sakharov as a way to pay tribute to this outstanding person,” Likhachev said. 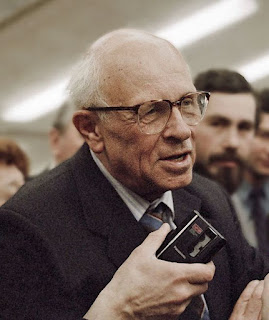 Andrei Sakharov’s granddaughter, Marina Sakharova-Liberman, recalled her ancestor’s contribution to science and expressed confidence that the Mayak Academy would help discover new talents. “What makes this ceremony special is that today is both Andrei Sakharov’s 100th anniversary and the World Science Day. A talented engineer, Sakharov made a huge contribution to fundamental physics. He proposed the concept of a controlled nuclear fusion reactor, the tokamak, and came up with the idea of ion catalysis, which laid the foundation for a new field of physics. I hope and believe that the Mayak Academy, now named after Sakharov, will help bring forth a new generation of outstanding scientists and engineers,” Sakharova-Liberman said.

Following the opening ceremony, the Mayak Academy hosted the International Science for Peace and Development Dialogue Forum, sponsored by the Commission of the Russian Federation for UNESCO. The forum was dedicated to the ethical aspects of science and technology and the extent of a scientist’s responsibility for their discoveries.

The Mayak Academy is a unique joint project of Rosatom State Corporation and the government of Nizhny Novgorod. In 2021, the historical building housing it – once a bank run by the Rukavishnikov merchant family – was partially reconstructed through the efforts of Rosatom State Corporation. The Rosatom learning center to be set up here will serve as a venue for lectures, workshops, exhibitions and other events.

Rosatom is a global technological leader, with capacities in the nuclear sector and beyond, and business partners in 50 countries. As one of the pioneers of the nuclear industry, Rosatom has traditionally been at the forefront of the international nuclear market, including nuclear power plant construction, uranium mining and enrichment, and nuclear fuel fabrication and supply. Today, thanks to the unique expertise accumulated over 75 years, the company is conquering the markets of new promising high-tech products. Hydrogen energy, energy storage, nuclear medicine, wind energy, composite materials, logistics business, environmental solutions - in total, more than a hundred new businesses, which cement Rosatom’s standing among the leading tech giants.