Historical Landmark Reached....As Innovative Rhisotope Project Moves to Next Stage After Success of Phase One 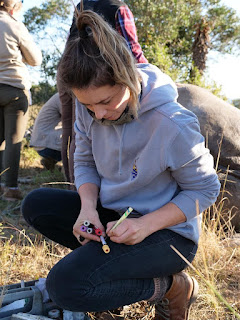 Once the study is completed, the project will be extended to the whole of Africa and other continents. Conservation organisations will be able to benefit from the training programmes free of charge. The project could also be used to save other endangered species.
“The Rhisotope Project has reached the first major milestone in being able to demonstrate to the regulator, the university’s animal ethics committee, and stakeholders in the welfare of rhinos that it is completely safe for the animals,” said Prof. James Larkin, Director of Radiation and Health Physics Unit at the University of the Witwatersrand and the founder of the Project.
Ryan Collyer, CEO of Rosatom Central and Southern Africa, is confident that nuclear science will play a fundamental role in protecting African rhinos and biodiversity in general. “We are incredibly proud to play a key role in this amazing initiative that will help save these incredible animals from imminent extinction,” he said.
About the Rhisotope Project:
The Rhino Project is an initiative between WITS University, top global nuclear scientists, researchers, South African rhino owners and the best wildlife veterinarians in the world to significantly reduce rhino poaching. In short, by placing radioactive material in rhino’s horn, we create an effective demand reduction and rhino protection tool. It is giant leap forward in the protection of this endangered species. If the appetite for horn lowers so will poaching, the two challenges are not mutually exclusive and are inextricably linked.
The purpose of the project is to create a lasting and effective means of significantly lowering the amount of rhino being poached and killed for their horns. These animals need us more than you know. Through this project, The Rhisotope Project will provide an effective tool in the toolkit of rhino protection, innovation and the ability to evolve as the landscape changes is key.
With the international nuclear and radiological expertise brought by Rosatom to this project, it will make a significant contribution to saving and protecting rhino by reducing the desire for rhino horn, by both poachers and the end user, through the effective use of radioactive technologies currently available. This will enable on the anti-poaching teams to be more effective, as well as assisting international and South African law enforcement agencies track and trace the rhino horn trafficking channels by using current nuclear security capabilities in airports and harbours. Trafficked rhino horn is not an industry of its own, it has become another lucrative “commodity” for the biggest crime syndicates to benefit from. Even though the trade in rhino horn is illegal and banned internationally, there are many countries that drive the illicit sale of horn.