Plateau is the twelfth-largest state in Nigeria. ... Plateau State is celebrated as "The Home of Peace and Tourism". With natural formations of rocks, hills, and waterfalls, it derives its name from the Jos Plateau and has a the population of around 3.5 million people.

BUT beyond being a home of peace and tourism, the state is heavily regarded as a deep soccer-loving state, of which the two biggest teams in the sate Mighty Jets and Plateau United have for decades being entertaining the people, but not without a deep soccer rivalry 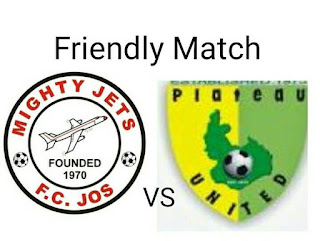 And come this weekend, peace and unity will be the norm as all is now set for the much anticipated 2020 UNITY CUP AND CLASH OF LEGENDS ENCOUNTER

Former super Eagles marksman, Ben Akwuegbu aka " Austrian Bomber"  who is chief initiator and visioner of the the event, last night revealed the motivation behind his huge sponsorship Of both Unity cup event Jos and the legends Of Plateau reunion get together billed for 20-22nd March 2020

Speaking in a long telephonic chat with WORLD LEADERS

MAGAZINE from his England base, the bulky hit man whose playing career took him to France, Belgium, Austria, Switzerland, China and back to Vienna, stated that he is on a give-back mission
" I am nothing today without Good people Of Jos, I was born there, schooled there, played for Under 17; 20 and Super Eagles because my talent was developed from Saint Murrumba and then by Mighty Jets
“The unity cup and legends Of the game is to unite all the state and stars together, want to use it to bring big stars back to Jos, we want to use it to preach peace and unity that soccer is love, not a game of do or die” he stated, assuring that ex-internationals both from home and abroad have already signified  their resolve to be in JOS for this historic event