STATE OF NATION : Oyegun and the Abuja disease 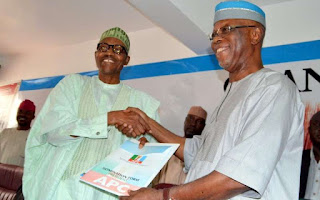 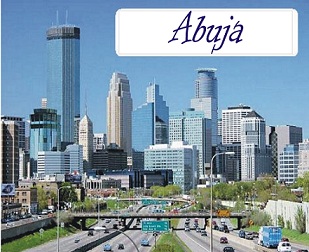 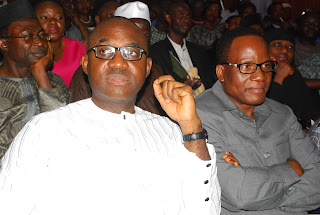 Abuja disease is a peculiar affliction in Nigerian politics. It refers to the tendency of an actor with otherwise modest endowment or from humble station to transmute to a monstrous creature once he/she enters the nation's capital and begins to frequent the power circles.
Intoxicated by a new false sense of identity, such upstart does not consider it abominable to now point at their cradle with the proverbial left hand, mocking old benefactors, before their new friends.
Chief Odigie Oyegun would appear the latest sufferer of this pathology. With a straight face, the National Chairman of ruling the All Progressives Congress (APC) toiled hard to deny allies who smoothed his path to office. Perhaps the most audacious of such exertions was an interview published by Vanguard where he sought to disavow a known truth: the decisive role played by both Comrade Adams Oshiomhole and Asiwaju Bola Tinubu in his emergence in 2014.
Specifically, the interviewer asked: "Some are alleging that you've not been fair to those who assisted you to emerge National Chairman of the party, especially Bola Tinubu. Is this true?"
Hear Chief Oyegun: "Everybody assisted me to this position and I'm grateful to all of them. The only thing is my personality and integrity; I don't joke with these two things because they're the only currency that I've and I'll defend them at any time. I don't believe one particular person solely assisted me to this position."
And in what sounded more like a poor imitation of Buhari's now famous inaugural "I belong to everybody and nobody" phrase, Oyegun added: "Some day, the story of how I became chairman of APC will be told. You will then see that everybody did assist me to become National Chairman. This means that I'm there for everybody. I don't belong to any camp in the APC. I belong to all members of APC high and below."
With that, the APC chairman could, however, only be said to be deceiving himself in his desperation to impress a national following that does not exist. In the same interview, even more disturbing was his showcasing a poverty of ideas so blissfully over the reported insolvency of the party's national secretariat. We shall return to this presently.
Now luxuriating in the new-found glory, Oyegun must be assuming that the nameless - but nonetheless discerning - porters at Benin airport have forgotten the wilderness days of 2013 and early 2014 when they often would relieve an elderly man, regularly clad in French suit, of his little bag after rushing in from his hermitage on the sedate Reservation Road in Benin GRA to catch evening Arik Air flight to Lagos - tellingly at predictable intervals.
Easily given away by the littleness of his luggage, no one needed further proof that his mission in Lagos could be other than political meetings, hosted by folks whose generous hospitality he now belittles.
So, when Oyegun spoke in such imperial tone, he must also have assumed no one remembers how the Edo chapter of APC had unilaterally issued a statement endorsing his then arch rival, Chief Tom Ikimi, solely for the office in 2014, obviously to foreclose his (Oyegun's) chances.
Unhappy with what he considered "an anti-democratic maneuver" and "a crude attempt to close the political space", then Governor Oshiomhole had to make a passionate appeal to the state party executive to shift ground. They were incensed that even with the convention barely few days away, Oyegun still had not thought it courteous to formally intimate them of his interest in the big job.
Following Oshiomhole's intervention, the Anselm Ojezua-led state exco backed down and granted Oyegun audience to make a presentation. Thereafter, the Edo APC recanted its earlier position by issuing a statement also acknowledging Oyegun and wishing both contenders good luck at the national convention ahead.
That development would cost Oshiomhole his political relationship with Ikimi seen largely as the man to beat for his greater national visibility which he was too eager to flaunt to the point of hubris.
If Oshiomhole ensured home anointing for Oyegun, Tinubu sold him to his allies at the national level, obviously out of a nostalgia for - and maybe over-romanticization of - their NADECO past. We are talking of the days of innocence of APC when key gladiators still related as comrades united by a shared resolve to oust Goodluck Jonathan from Aso Rock; when the atmosphere had not become poisoned by mutual suspicion and deep bitterness arising from a sense of alienation. 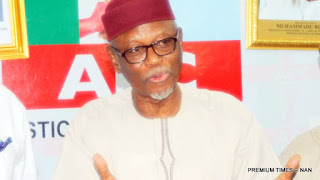 Of course, it is open secret that over the years Asiwaju and Ikimi never got on well over the former's memory of the brutal repression suffered as NADECO exile under dictator Sani Abacha in the 90s with the Oduma of Igueben serving as the voluble foreign minister.
It is a measure of Tinubu's blistering networking that Ikimi eventually faced stiff resistance from almost everyone who held the ace within APC then except Turaki Adamawa (ex Vice President Atiku Abubakar). Out-muscled, he had no choice than withdrawing few hours to the commencement of voting at the convention. In pulling out of APC eventually, Ikimi brought drama and a lengthy epistle dripping of bile and acid.
Reminding the public how he had hosted several exploratory meetings that led to APC's birth in 2014, Ikimi likened what happened to "someone taking away my pot of soup", more or less dismissing Oyegun as a political merchandise with little or no electoral value.
Indeed, in hindsight, Ikimi would now seem vindicated. At home, Oyegun has in the last three years been exposed as grossly impotent politically.  In the 2015 general polls, not only did the APC national chair fail to deliver his polling unit in Oredo, his ward, local government and the entire Edo South senatorial district were also lost to PDP. It was only Oshiomhole's rally in his native Edo North that ensured APC eventually deliver 45 percent to Buhari's victory in the historic March 28 polls.
Even more humiliating was the outcome of the state governorship primaries in 2016. Oyegun's anointed in the shadow polls came a distant third to Godwin Obaseki. In the September 26 governorship polls proper, Oyegun, the great national chair, failed again as PDP won his polling unit right there in Oredo, the heart of Benin City.
Back in 2011, even as the presidential running-mate to Shekarau on the ANPP platform, Oyegun's showing at home was no less disastrous. ANPP performed woefully across Edo. In fact, on account of the sparse number of votes recorded in Benin City, it would not be exaggeration to say no one outside Oyegun's family members and few loyal neighbours came out to support a ticket that supposedly had "the son of the soil" as the vice presidential candidate.
Taken together, no one is begrudging Oyegun whatever super stardom he thinks APC leadership now confers on him. But what we only expect of those whose palm kernel has been cracked by benevolent gods is simple - humility. While Oyegun now makes a fetish of self-declared "personality and integrity", we only expect a demonstration of this very virtue in a fidelity to the facts of history, particularly when the memory is still fresh.
Acknowledging those who provided you ladder to climb to a height will not in anyway dim your stardom. On the contrary, it confers greater nobility. Only those incurably afflicted by the Abuja disease would seek to belittle, without qualms, their key enablers of yesterday.
On APC's state of financial health, Oyegun also missed the point by dragging PMB's name at all into the story of APC's illiquidity. Contrary to his insinuation, no one is saying or expects Buhari to dip hands into public treasury to fund party's activities. I think the issue is whether enough incentives are being created for party members or blocs to have a sense of ownership that will, in turn, ginger them into freely bringing their widow's mite.
How was the party able to finance itself before gaining power?
Theoretically, a party is supposed to draw oxygen substantially from membership fees, dues and levies by those who subscribe to its charter of values.
To be fair to Oyegun, party finance remains a sticky point even in the so-called mature democracies. In the United States, the corrosive influence of Wall Street was a big issue in the both the primaries and general polls last year. The challenge has been how to evolve institutional bulwark against kickbacks, influence peddling, embezzlement and extortion on party's behalf.
In the present circumstance, it is, however, debatable whether Oyegun has been able to draw on his much vaunted "personality and integrity" to provide an exemplary leadership that towers above the squalor of partisanship and therefore commands greater loyalty and trust of all and sundry. It then explains why the national secretariat appears increasingly deserted and the earth vanishing under Oyegun's bare feet.
Nothing illustrates graphically that loosening grip than the reported tumult in Abuja on Tuesday by state chairmen of the party. While Oyegun would typically choose to live in denial, the party's chief spokesperson, Bolaji Abdullahi, was forthright enough to admit that the state leaders were bitter over Buhari's "lopsided appointments" which have only succeeded in casting the government as sectional; a total negation of the promise of 2015.
With the deafening rabble at the door, the question now is whether Oyegun, as the embodiment of the heart and soul of APC, has the courage and the gravitas to convey the message to Buhari with a view to winning back those who genuinely feel alienated. That may be a tough call for a pensioner feverishly afraid of losing his own share of the spoils of office in Abuja.
Meanwhile, with his kinsman now appearing to totter under the weight of office in Abuja, I can see Ikimi taking another sip from his favorite cognac this moment, smiling mischievously.