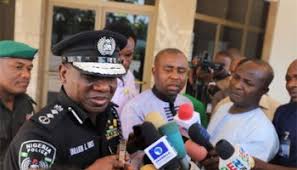 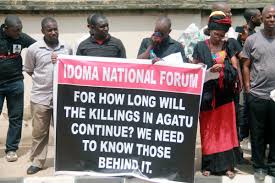 As the nation groped in fuel darkness during the Yuletide season, the Nobel laureate's distraught words perhaps best described the shame and tragedy of it all. The authorities in Abuja would rather indulge in the profanity of buck-passing, lamented Professor Wole Soyinka.
That climate of shame would appear to have grown even more inclement and the midnight children of impunity more daring with the resumption of terror and bloodletting early in the new year by Fulani herdsmen.
Citizen Peter Aboh had his dream of better life aborted eight months to graduation from the Federal University, Lafia. The final-year student of Microbiology was felled in his home in the midnight attack by rampaging herders. The twenty-seven-year-old was one of the ten gruesomely killed last weekend.
Sixty-one others - including old women and little children - were similarly wasted five days earlier in five Benue communities in apparent reprisal attack over the loss of nothing more than cows.
Being cowards themselves, the butchers stole in on their victims in their sleep, in their most vulnerable state.
Those silenced by booming AK-47 would even consider themselves oddly fortunate at the lightning speed of murder and therefore less abuse of their human dignity. A good many others suffered additional trauma of slow death by being hacked perhaps with primitive and blunt daggers, making the cruelty more intimate and the killing bestial.
Even as it haunts, truth also heals. But nothing would hurt the bereaved of Benue more than the peddling of callous lies or engaging in mischief despite the sobriety imposed by the dark ambience of the funeral parlor. Such distractive chatter only mocks the dead.
We saw that oddity in the allegation by Paul Unongo that Atiku Abubakar, as chief patron of the herders' fraternity - Miyetti Allah, was a key financier of the mass murder. A charge the former Vice President not only denied stoutly but added that his accuser, being Buhari's political appointee, was only out to impress his paymaster.
Then, the Northern Elders Forum of which Unongo is chair came out to lampoon him for dragging their corporate name into petty political squabble with Atiku.
Soon, another publication, ostensibly cobbled together by Buhari sympathizers, surfaced online portraying even Goodluck Jonathan, the instinctive mariner, as a backer of increasingly controversial - if not notorious - Miyetti Allah. We were served a bromide of Miyetti letterhead certifying the former president a "grand patron".
With that, it is easy to discern an elaborate scheme by do-gooders who think they are championing Buhari's interest but in reality are only worsening things for him, to link several other high-profile political players to Miyetti possibly with a view to forcing a new narrative on the public that decouples Buhari as the only known "grand patron" of Miyetti Allah and therefore not the lone "accomplice" by association.
That nagging characterization undoubtedly sprouted from a long-standing affair with Miyetti that once led him to, even as former military head of state, unwisely accept to lead a herders' delegation to Ibadan in 2000 and famously read a bitter petition against then Governor Lam Adesina of Oyo to "stop maltreating my people".
Of course, that was ages ago.
Unfortunately, such tainted memory subliminally fills people with prejudice against Buhari even when he has the best of intentions. It is easy to understand why a Buhari, Atiku or Jonathan could have easily ended being garlanded as "patron" by Miyetti in the first place. Public office holders daily have to engage countless publics among which the herders count.
True, no section of the law of the land forbids such liaison. However, there is one moral obligation Miyetti patrons like Buhari, Atiku and Jonathan owe the nation - finding the courage to condemn the wanton shedding of human blood to avenge the loss of cow. The culture of silence in high places is what emboldens them to kill more. Consider what will happen is the exclusive "body of patrons" jointly read the riot act to the blood-hounds to desist, failing which they will renounce their patronal affiliations in the first instance.
Courage is ultimately required of those in position of influence never to hesitate in painting evil in its truly sepulchral colors. Such virtue would, for instance, have obliged PMB, a notable cattle farmer himself, not to feign ignorance in his New Year national broadcast over the emergency the herdsmen/farmers issue now clearly represents. This pestilence, let it be said, is today the starkest manifestation of a widespread threat to the peaceful coexistence of Nigeria's multi-ethnic union since the Civil War.
In countless other communities across the nation, these migrant killer herders are similarly engaged in supremacy battles with the locals over the right of way and grazing rights. 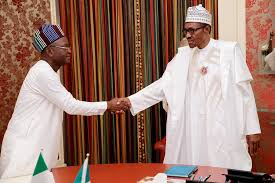 The outcome is ugly. In my own community in Edo, Fulani herders routinely sack farmland and violate women as well with impunity. We are often consoled by complicit authorities to accept that the aggressors are aliens. The puzzle then: why is it still so difficult to round them up and accord them the treatment due the enemies of society. Truth stands on its own; it certainly requires no prosthetics.
Surely, courage is needed to bring a murderer to justice, especially when they happen to be a relation. The Inspector General of Police needs it. Otherwise, he would not take liberty to term the Benue killings the consequence of a "communal clash" even when the leadership of Miyetti Allah are audacious enough to formally claim responsibility for the killings as "revenge" for cows stolen.
And Audu Ogbe, otherwise a good man and great communicator, also suddenly became tongued-tied, perhaps because of the strange company he today finds himself in Abuja. To the reports of a premeditated slaughter of his kith and kin Benue, all he could mutter was a plastic "extremely disturbing".
But Ogbe should have seen this coming when, against commonsense, the law of free enterprise and the spirit of natural justice, he found himself having to justify the importation of "special grass" at taxpayers' expense to feed the now sacred cows belonging to private individuals.
Courage is also needed to make Miyetti Allah submit to the law of the land and respect the cultural sensibilities of states like Benue and Taraba which have enacted anti-open grazing law. It is a reflection of insufferable outlawry for the herders to openly vow they would defy the law. They ought to realize that their commercial right to breed cows does not exclude others from living in peace in their ancestral lands.
Looking ahead, courage is certainly required to sustain the enlightenment to make Miyetti Allah accept ranching as the most sustainable solution to the herders/farmers clash consistent with global best practices. It bespeaks poor reasoning to continue to cling tenaciously to an antiquated notion when science and technology already unlocked the door to infinite possibilities. Or to insist there is no alternative to the primitivity of herding cattle from the dizzying height of Futa Jalon to the swamps of Niger Delta, fattening on the crumbs of ignorance as it were. That amounts to cruelty to the animals themselves.
Prosperous Denmark readily offers an inspiration. Agriculture - of which dairy industry constitutes a significant portion - accounts for 20 percent of her export. Their cows are ranched, not herded all over Europe. Controlled atmosphere that a ranch provides ensures farmers are able to expose their herd to modern techniques to maximize yield. Little wonder the country is ranked the happiest nation on the planet.
With estimated population of 22m, Nigeria's cattle stock represents a significant two percent of the world's total. With her own 22m dairy cows, Brazil accounts for 8.7 percent of world milk production. Since ours ranked among those yoked needlessly, Nigeria is hardly featured among countries with the elite 274m dairy cows dedicated solely to milk production.
Why are we unable to borrow from models that work?