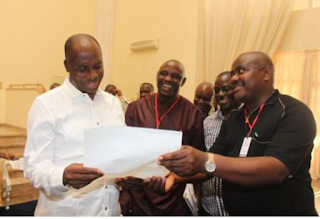 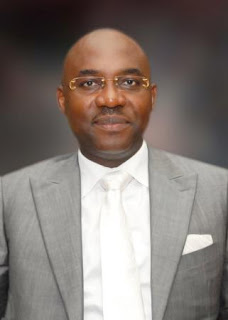 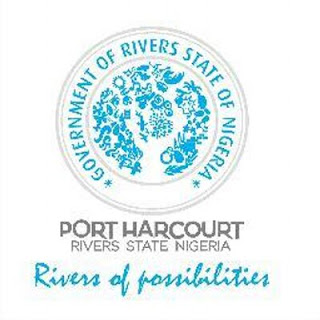 If any doubt had lingered on the certainty of opioid epidemic afflicting Nigeria's youthful population, it surely was removed last week with the cold statistics reeled out by the University of Lagos.
For parents who might wish to stand up in arms against its new extra-ordinary policy to administer drug test batteries randomly on students with the same aplomb road safety marshals subject any suspicious-looking driver to breath-analyzer on the highway, the outgoing vice chancellor, Professor Rahman Bello, painted a rather chilling picture likely to fill older alumni with nostalgia for the age of innocence and the paradise lost.
Last academic year, he confirmed that no fewer than 100 students tested positive to drug abuse. Of course, psychotropic substances abused range from conventional cocaine, heroine, marijuana to the new ones - Refnol, Tramadol and codeine.
Then, the UNILAG authorities chose to be supportive by not expelling them outright. Rather, they quietly put them through some rehabilitation lasting two or three semesters, re-admitting them into the classrooms only upon certification that their system had been cleaned out and an undertaking never to go back.
Now, Bello says: "With the test kit, anyone who is suspected, his or her urine or blood ... is collected for test. The thing about drug is that when you take it, it'll be in your blood for a long time, so you cannot say 'I did not use it' once the test kit detects it."
The drastic measure, he hopes, will help the institution deal squarely with the menace of drug abuse on campus because “If the individual is not stopped, he or she will influence so many others."
Indeed, UNILAG's number is even insignificant compared to the raw figures polled elsewhere in more permissive environments. In most urban centers today, drug culture is truly festering. According to Olarenwaju Ipinmisho, immediate past Director General of the NDLEA, "If you take an estimate of 10 boys, particularly in Kano, seven will be on drugs". It is that critical.
If nothing at all, this surely confirms Nigeria's transition from mere producer (of methamphetamine) and  preferred smuggling route to a big-time consumer of the dark ware.
More troubling is the implication of the women folk. Whereas the indigent male who can't afford expensive cocaine goes as far as sniffing petrol or fermented human waste known as "Jenkem" with hallucinatory effects, the female prefer to source their own "high" from the overdose of regular codeine syrup.
By and large, never has drug use been this glamorized and its abuse romanticized.. We hear it in hip-hop songs topping the national chart. Musical videos airing on television during evening hours you would consider "family moment" explicitly depict the new cool as lads snorting powdery substance on the glass top. It makes them "get high".
Taken together, the deleterious effects of this new epidemic on the larger society - both in immediate and long terms - is better imagined. It is already bad enough that we are presently yoked with an underachieving nation. The dark prospects of being succeeded by a generation of drug addicts should truly terrify all Nigerian patriots today. While one is not advocating a Duterte-kind of brutal crackdown that has left thousands dead in Philippine, now is the hour to break the conspiracy of silence over the cancerous development.
To begin with, the puzzle is what is keeping the government from formally declaring an emergency and enacting a policy that not only seeks to conscientize the youths against the terminal danger but also rally the socializing agencies (including the media) in the advocacy. It certainly will be more beneficial if emphasis of the counter strategy is also extended to the demand end of the drug chain, not exclusively on the supply as presently constituted.
At the level of law enforcement, let it be known that the conventional tactic of merely having some hyperactive anti-drug goons lay ambush on the provincial highways for off-road jalopies concealing bags of Indian Hemp or jaded NDLEA officials mounting sentry at the national borders is simply no longer adequate to contain the new monster. Tramadol and the likes come in more convenient micro package and lurk around the street-corners. They circulate discreetly at both big and small night clubs.
So, the tactics of the sheriff have to change as well. For instance, the new Lagos Commissioner of Police has directed night clubs operating in the metropolis to equip their premises with surveillance cameras. That is quite imaginative. But that alone will not do. Undercover agents should be deployed in addition to apprehend those promoting drug sale and abuse. Offenders deserve to be treated with as much severity as anyone found committing felony as grave as treason against the country.
At the level of advocacy, I propose that the media take the lead. It will not be out of place if newspaper proprietors and editors jointly resolve to, as a civic duty, deliberately erect a hall of shame where, for instance, musicians whose songs promote drug use/abuse or cross the line of decency are lined up daily for public ridicule.
Things cannot continue like this. 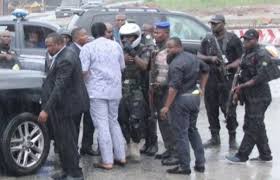 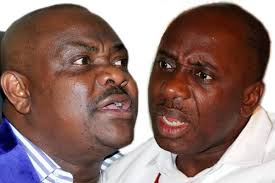 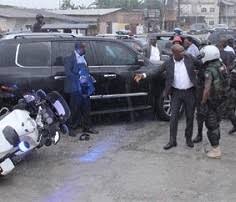 Following media reports of the show of shame in Port Harcourt last Sunday, a reader (on 08057376075) was sufficiently enraged to call yours sincerely and ask that all the policemen involved on both sides - whether Nyesom Wike's or Rotimi Amaechi's - be summarily dismissed for "bringing shame to the Nigeria Police" and acting like political slaves.
But that will not be enough.
With the Rivers governor and Transport minister hardly seeing eye to eye anymore over political differences, what should ordinarily be a non-issue, had commonsense prevailed, was allowed to degenerate to a fierce power show Saturday along Trans Amadi Road over who had the right of way. "Mr. Projects" (Wike) was reportedly on routine inspection of ongoing constructions while the "Lion of Ubima" just breezed into town that afternoon.
Weapons capable of mass killings were cocked and brandished amid the exchange of expletives. Regardless of subsequent finger-pointing by their aides, nothing can absolve both Wike and Amaechi. It takes two to tango. As governor, the burden of leadership was on Wike to rein in his guards, even under extreme provocation. As for Amaechi, it is even more scandalous that he, as an appointed minister, could ever allow himself to be drawn into ever contesting the supremacy of an elected governor within the latter's own jurisdiction.
Logically, the power-bike outrider leads the governor's motorcade. Knocking Wike's pilot down (as seen in the newspaper photograph and on Channels TV) could only have been driven by a daring that bothers on lunacy. When Amaechi was governor himself, it is doubtful if he would have tolerated that. The bitter truth has to be told.
Beyond the show of shame, another sordid thing inadvertently exposed is the misuse of our military. One read and re-read the vigorous defense by Amaechi publicists; nowhere did they deny that soldiers were among those escorting the Minister that day. Which tends to lend credence to stories already circulating that soldiers usually chaperon the minister around in Rivers in a blatant abuse of the Nigerian military.
The Commander-in-Chief could not have approved that.
It is doubly scandalous that the now controversial head of the F-SARS (Federal Special Anti Robbery), Akin Fakorede, was also implicated in the Saturday infamy. It is perhaps a measure of the corruption of the F-SARS mandate that, rather than chasing ubiquitous criminals, its materials and men are now deployed as bouncers to visiting Abuja big men.
We know Fakorede's posting was influenced by the politicians. But must he go that far publicly to demonstrate appreciation?
The other day, rain-beaten Fakorede was pictured holding umbrella over the MD of NIMASA as the latter stepped off a jet onto the tarmac at Port Harcourt airport. Maybe, F-SARS also now offers meteorological protection.
The least expected of the high apostles of "change" of the ruling party is to be exemplary in their own public conduct and not continue the iniquities and impunity PDP was accused of yesterday.