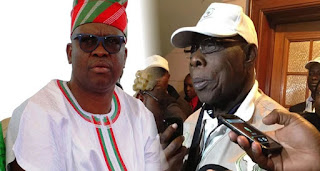 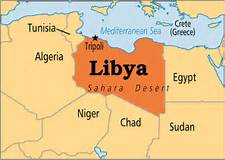 " Truth is Constant"
OBJ, Fayose and the Libyan idol 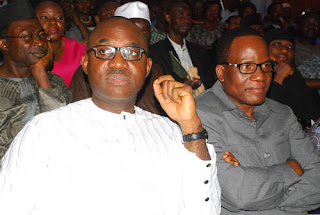 A humour bag of arguably inexhaustible depth, former President, Chief Olusegun Obasanjo, would make even the most consummate stand-up comic feel inadequate on a good day. From improvising the risqué to trafficking the folksy, his creativity, as he himself once famously put it in one such fit of self-deprecating humour, is fed by a certain native resourcefulness, being "Omo ma lo le gbesi" (scion of he who is prodigiously adroit at tackling single-handed any public loud-mouth without help from home). "Wait and get", for short.
The reason it is therefore rather surprising, if not troubling, that the witty general has kept a studied silence to the avalanche of weighty revelations by Ayo Fayose, the feisty Ekiti governor, in the current edition of wave-making The Interview. Since release last Thursday, Fayose's wide-ranging expose on his one-time political godfather has been widely reproduced by all leading national dailies with massive rebroadcast in the social media.
At this writing, five uneasy days had passed without as much as a whimper from Ota. More and more, the ensuing silence conveys an eloquence not even a thousand words can possibly describe.
Whatever happened to the fabled facility of "Wait and get"?
Hell hath no fury than a woman scorned, Shakespeare tells us.
Now, with Fayose, we now know no venom is as lethal as an estranged godson on rampage. For all his unalloyed loyalty and submission to be used for dirty jobs, he regrets Obasanjo eventually betrayed him by orchestrating his kangaroo impeachment in October 2006.
Of course as a former OBJ enforcer, the "Oshoko" of Ekiti was an insider. What seems to complicate matters is that he did not just squeal; he named living witnesses in the series of infamies OBJ perpetrated as Nigeria's civilian emperor, particularly between 2004 and 2006. 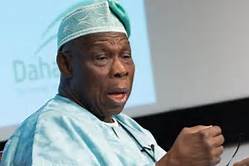 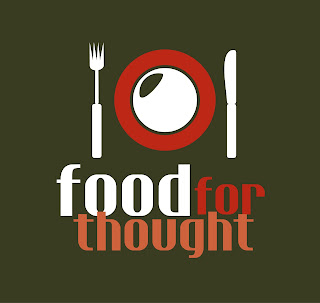 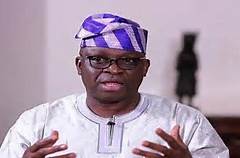 The revelations surely stink. The image of Obasanjo revealed is pathetic indeed. They include how public funds were used to bribe lawmakers to support Third Term Agenda which OBJ has in the last decade fought tooth and nail to deny. Going down memory lane, for instance, Fayose recalled that the day the bill was shot down at the National Assembly, OBJ dozed off in bitterness as they rode together from Akure airport to Ado Ekiti. Midway, he recalled, OBJ jerked up from slumber, muttering, "Ah, (Ken) Nnamani (then Senate president) willl not leave in one piece".
We are also told how Umar Yar'Adua initially refused to accept being drafted as PDP's presidential candidate on the ground that his health was too fragile to withstand the rigour of presidential office. But OBJ, according to Fayose, insisted on foisting him on the nation in the cold calculation that infirmity would pre-dispose the Katsina political prince to being manipulated while the Ota farmer continued as Nigeria's de facto monarch.
Again, at this writing, none of the political actors Fayose "implicated" in the plot that drafted Yar'Adua including Senate President Bukola Saraki and Senator Goje has denied.
Perhaps the most jaw-dropping of all Fayose's revelations is the claim that OBJ physically knelt down before Libyan strongman, Moummar Ghaddafi (presumably in January 2006) with a view to enlisting his support for the extension of his chairmanship of African Union.
Again, to be sure, Fayose named then Attorney General (Bayo Ojo, SAN) as part of the secret mission to Tripoli.
His recall of the comportment of a kneeling and "desperate" OBJ before Ghadaffi after being frisked thoroughly at four gates in a most un-dignifying manner should fill any self-respecting Nigerian with shame: "It was such a pathetic scenario, so shameful. Obasanjo was speaking rapidly like a parrot... I never knew Obasanjo (could) be that humble. He was on one knee till the end of the conversation."
Put together, the picture Fayose painted is inconsistent with OBJ's holier-than-thou posturing over the years, this affectation of statesmanship and sagacity.
Good enough, according to reports, the general is already pre-scheduled to, this Sunday (August 6), mount the podium at Archbishop Vining Memorial Church Cathedral, Ikeja, Lagos to deliver a lecture entitled "God in my life".
Without taking anything away from the message he might wish to communicate, it would certainly be therapeutic for an apprehensive nation if OBJ first came clean that day on what really transpired in Libya. In case he confirms visiting Ghadaffi, then the other critical question: did he actually bow before the Libyan idol?
To begin with, from the cultural perspective, I can almost bet many would be heart-broken in Yoruba land at the suggestion at all that OBJ, whose estimated birthday is March 5, 1938, would openly kneel before younger Ghaddafi born in 1942. Again, Libya is a tiny country with a population of less than 7 million compared to Nigeria's 180m!
So, this is one grave allegation OBJ cannot just wish away.
Otherwise, the nation will collapse under the shame. Russia's literary immortal, Alexander Solzhenitsyn, once attempted to speak to that sinking condition. One of the telltales signs exhibited by a declining society, according the late Nobel laureate, is the scarcity of true statesmen.
Philosopher Khalil Gibran put it more starkly with this lamentation: pity the nation whose heroes or statesmen are either impostors or conmen.