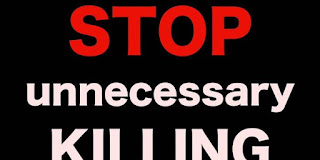 “There are many things worth living for, a few things worth dying for, and nothing worth killing for.”
― Tom Robbins, Even Cowgirls Get the Blues

Governor David Umahi sympathsng with a 35-year-old woman with 15 children whose husband was among those killed by people  from Ovuruokpon in Cross Rivers State who attacked   Azuofia-Edda in Abakaliki Local Government Area ...
BY MIKE CERUTTI
Ebonyi State Governor David Nweze Umahi has in strong practical terms  lamented the attack on Azuoffia Edda in Abakaliki Local Government Area by people from  three  communities  in Obubra LGA of Cross River State,   warning that no Ebonyian would be killed anymore under his watch.
Umahi, in company with security chiefs in the state, including the Commander of Abakaliki  Cantonment, Peter Kulawe and Commissioner of Police, Titus Lamorde, described the onslaught on Azuoffia-Edda  people as man’s inhumanity to man.
The governor, who was in the  nearly deserted  community to supervise the distribution of relief materials by the  National Commission for Refugees, Migrants and Internally Displaced Persons  to the displaced survivors, had earlier been told by the Abakaliki LGA chairman, Peter Nwaogbaga, that   the attackers   killed four people and  kidnapped three others. 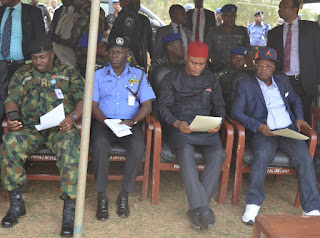 A  visibly displeased Umahi   said: "Under my watch, no Ebonyi man will be slaughtered again. We will not allow that to happen. The essence of coming to leadership is to protect the lives of our people.
"I'm so sad today(Tuesday) and want of speech for this  man's inhumanity to man. It's so disheartening that this kind of thing will be happening in our society.  It's so shocking," he said in a statement on Wednesday by his Chief Press Secretary, Emma Anya.
The governor   told the  villagers who gathered  at the Azuoffia-Edda Primary School III that he was surprised that the attack on them  by the people  of Ovuruokpon village, Ogurude and ohene in Obubura LGA still took place after a peace process between the two neighbouring states had commenced.
Umahi explained  that the people of Azuoffia-Edda were wrongly accused  by  their neighbours in Cross River  State of  using human head to bury the dead.
He said that people, including security agents   aware of the tradition and customs of Ebonyi people would testify  that  such is not practised in Ebonyi State.
"The root cause of the crisis is very funny. We have security agencies in our state who are not indigenes of Ebonyi State and they know very well  that we don't bury people with human beings,"  the governor added . He thanked  Acting President  Yemi Osinbanjo,   security agencies  and  the National Commission for Refugees, Migrants and Internally Displaced Persons for their quick responses    to plight of the victims.    "We shall work extra miles and extra hard with the Presidency with national boundary commission, security agencies and the Governor of Cross river State to see how we can quickly resolve this problem," he  promised.
Anya’s statement said that a 35-year-old woman, who spoke with journalists, explained that her husband who  was going to harvest their farm produce    was killed by the attackers who struck from three fronts. “They killed him. He was going to harvest produce    early that morning when they accosted him. Now, how  am I  going to cope with the 15 children I have for him?” she lamented.
In his remarks, the Special Assistant to the Governor on Inter Party Dialogue, Chief J.O.J. Oketa whose house was among the damaged ones , said that seven out of the eight villages in Azuoffia Edda were attacked.