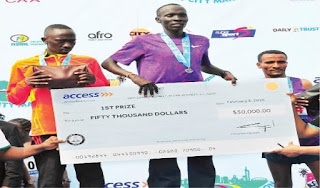 The surprise winner of the 2016 edition of the Access Bank Lagos City Marathon, Kenya’s Abraham Kiptum, has vowed not only to retain the title he won last year but promised to run a sub 2.10:00.
Compatriot Peter Kiplagat was favoured by athletics buffs to win the first international marathon in Nigeria in 31 years, but Kiptum surprised bookmakers when he won in 2.16: 21.
“I want to retain my title and run a sub 2.10:00 on February 11, 2017,” Kiptum said in a statement made available by the Communications and Media Department of the Access Bank Lagos City Marathon. 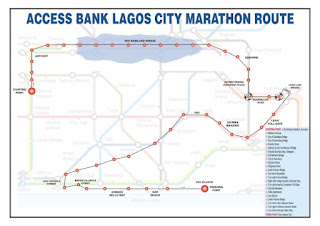 “I came to Lagos as an underdog, nobody gave a chance, and people were expecting Kiplaglat to win, so I ran without any pressure. I know I will be the center of attraction on February 11, but am mentally and physically prepare for the challenge, I know am in good shape to win and do it under 2.100.’
’ Kiptum also praised the Lagos crowd and the weather, “for a city that does not have a marathon culture like we do in East Africa, I was shocked at the people’s enthusiasm and support for the runners. They cheered us so I am appealing to the Lagos crowd to please to come out again in their thousands and support us in February.” 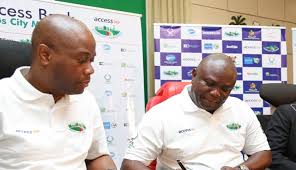 “The weather was also agreeable, I was expecting it to be very hot but it wasn’t, the weather was good’’.
Kiptum praised the Lagos State Government and the sponsor, Access Bank, for putting Nigeria on the global marathon map again.
“I strongly believe that Nigeria can compete with the world in marathons and road races if they invest in the talents they have. Remember, about 30 years ago they had Abbass Muhammed who was doing 2.16:00 then. At the last outing; there was Philip Sharabutu who ran 2:30:51 and some other young runners who finished the race under 2.40:00. If these runners are supported with the right coaches and they run regularly, they can catch up with the rest of the world in five years’’ said Kiptum 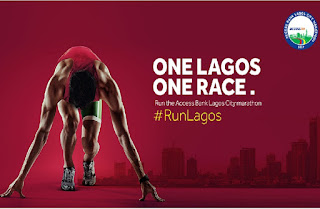