WHO IS WIDOW?
A widow is a woman whose spouse has died, while a widower is a man in that situation. The state of having lost one's spouse to death is termed widowhood. These terms are not applied to a person after he or she becomes divorced from their former spouse, though they may sometimes be used after the former spouse has died.
BY MIKE CERUTTI OSAGIE
* In Ebonyi State ,widows will henceforth enjoy monthly stipend  to help alleviate their sufferings in the mist of economic recession. Governor David Umahi   announced this during the grand finale of the three- day fasting and prayer summit,organised by   the state government  in conjunction with the Christian Association   at  the Abakaliki township stadium to start the new year with God. Umahi,who encouraged Ebonyi people to work hard and depend on  God , said God spoke to him to choose  widows in the 13 local government areas of the state and place them on   salaries. 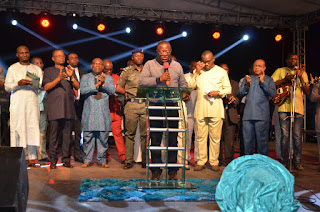 "God spoke to me again  to nominate widows in all the 13 local government areas and   start  placing them on small salary just like we do for  physically challenged persons. "Every month  we pay about 85 physically challenged persons some salaries. We are also going to do that for  widows," he said in a statement on Friday by his Chief Press Secretary, Emma Anya. Umahi,who assured that his government would  continue to bridge the gap between the rich  and the poor in line with his covenant with God, promised to complete in 2017, all the projects started by his administration.
He also vowed  to add more vigour to  the beautification of  Abakaliki capital city. "The beauty of Abakaliki has seen nothing yet. Men shall come from all works of life by Easter to behold the beauty of Abakaliki," the governor promised.
The  governor  told
the gathering that he  had declared two- day  public holidays for political appointees in the state  to enable them  meet   with people in their respective communities   on  how best to achieve more in the state’s  agricultural programme.
His words:  I have declared    Thursday and Friday   public holidays for all political appointees. Why? They have to go back to their Local Government Areas to host meeting on  agricultural programmes. Thursday, Friday and  Saturday, they have to be in their LGAs.   We have to take number one position  that we have taken in agriculture in this country."

Earlier,the Pastor of Christ Embassy Church and Chaplain of Government House  Chapel, Mrs Eunice Oyeyemi,in her homily, had called on all clergymen in the state  to  rise and take fully their responsibilities, stressing that as government was  doing their own,"we should do our part.”
’’It is time to shun those things that distract us as clergy. We must be ready to take the word to next level," she admonished.

She called on Ebonyians to support the good works of Governor   Umahi  by protecting government infrastructure.
The pastor also  enjoined the youth to shun violence  and cultism, proclaiming that Ebonyi would  this year  enjoy fully, the blessings of God.   Oyeyemi encouraged the people to always speak good of their leaders.
Special prayers were offered for the three arms of government and  the Umahi family.