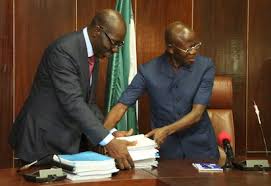 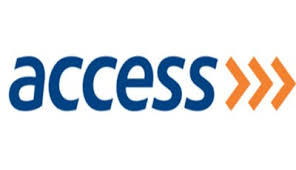 "History will always vindicate the just"-Late Zik of Africa


History was made last night,(Friday 11th November 2016) when out going Gov Adams Oshiomhole of Edo  passed on his hand over notes to Governor-Elect Godwin Obaseki.He gave the documents to Obaseki at exactly 8:44pm on Friday ahead of swearing-in which holds today.
Oshiomhole said that the governor-elect is fmiliar with the information contained in the documents as he had been part of his administration as head of his economic team.
“I hand over the comprehensive hand over note and formerly bring to a close my tenure”, Oshiomhole said.

Oshiomhole hoped that the governor-elect would do well for the people.
Obaseki, who will be sworn-in on Saturday gave assurance that he would put in every pint of his sweat and energy into the governance of the state.
He thanked Govs Simeon Lalong of Plateau and Mohamed Abubakar of Bauchi for witnessing the presentation of the hand over notes.
Oshiomhole thereafter formerly announced the dissolution of the State Executive Council. 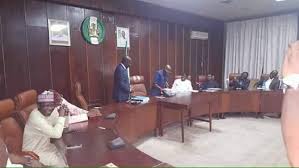 *Meanwhile, while wishing Governor Obaseki all the very best, we wish to remind him of this old file report of CERUTTI MEDIA POLITICAL PLATFORM UNIT (USED ON Wednesday, 28 September 2016)


CAN OBASEKI BE TRUSTED TO KEEP HIS WORDS ON 1OO NEW MILLIONAIRES IN EDO 2016?
ASKS MIKE CERUTTI OSAGIE 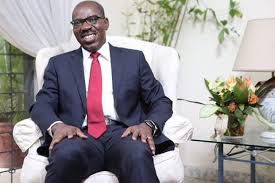 The quote by Obaseki to deliver more millionaires to Edo is a quote that must be placed on wall of EDO GOVERNMENT HOUSE If APC wins because not long ago, the  candidate of the All Progressives Congress (APC) in the today’s  governorship election in Edo State, Mr Godwin Obaseki, promised that if voted into power, his administration will produce more than 100 millionaires in the state in four years.
Obaseki stated this, while speaking with the Grassroots Youth Initiative (GYI) in Ikpoba Okha Local Government Area, urging the people to use their Permanent Voters Card (PVC) to actualize “the peoples-oriented plans already laid down by APC.”
He said successes recorded by the APC in the last eight years in Edo State were glaring, calling on electorate not vote for different political party.
“We are almost through with rebuilding of schools and we will finish them,” he said.
“But why are we doing schools? It is to correct all the mistakes that the PDP made in their years of governance that children didn’t want to go to school. Now, we have done it and we would get more teachers to teach the pupils and students.
“We are launching our programme on agriculture called ‘the anchor programme’. Edo has been selected for seven products, oil palm, rubber, cassava, maize, livestock, poultry and fishery. Government is going to support you all to excel.” 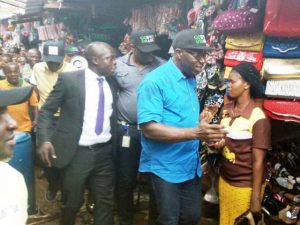 He said that he wished to be governor where people would not struggle to buy car, promising that his administration would produce 100 millionaires after four years.
On his part, the GYI President, Mr Osarobo Idahosa, said that they were ready to deliver votes for Obaseki , adding: “We are here to officially endorse you because we find you credible among other candidates.”


So with such promises, Obaseki must know that A PROMISE MADE AND NOT FULFILED REDUCES A MANS GENTITILTY
Good luck Edo new millionaires 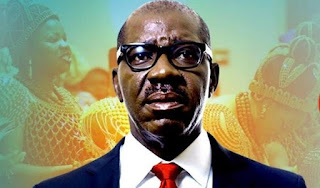 MR Godwin Obaseki was born in Benin City, the Edo State Capital to the famous and illustrious Obaseki family. He had his early education at St. Matthews Anglican Primary School, Benin City from where he proceeded to Eghosa Anglican Grammar School, also in Benin City for his secondary education. Thereafter, he attended the University of Ibadan where he obtained a BA in Classics. He took his search for quality education to the United States of America and attended the Columbia University and Pace University in New York obtaining an MBA in Finance and International Business. Illustrious career Obaseki Obaseki Armed with good education, the young Obaseki, who is a Fellow of the Chartered Institute of Stock Brokers, Nigeria and an alumnus of the Lagos Business School Chief Executive Programme did not have problems carving out a successful career in the finance industry. Obaseki, who was nominated a Global Leader for Tomorrow (GLT) by the World Economic Forum in 2001, began his career over 30 years ago and has established track records in Investment Banking, Asset Management, Securities Trading and the Public Sector both internationally and in Nigeria. He started out in 1983 with Capital Trust Brokers Limited, Lagos as a stockbroker where he excelled and subsequently worked with International Merchant Bank (an affiliate of First Chicago Bank). In 1988 he joined AVC Funds Limited, Lagos where he served as a Project Manager and led the core team that set up two of the new generation banks, which eventually reshaped the face of the banking industry in Nigeria. Between 1993 and 1995 he worked in New York as principal of Equatorial Finance Coy, a Financial Advisory firm with a focus on Africa and providing Structured Trade Finance for African related transactions through credit, financial advisory and risk insurance. Obaseki founded Afrinvest West Africa Limited (formerly Securities Transactions & Trust Company Limited (SecTrust)) in 1995 as the pioneer Managing Director. The firm has since grown to become a leading Investment Banking and Investment Management firm in Nigeria. In 1995 SecTrust was appointed the correspondent stockbroker for Nigeria by the International Finance Corporation (IFC). And in 1996, SecTrust 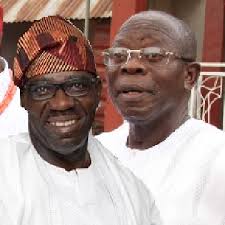 established the first derivative product, the Nigerian International Debt Fund (NIDF) on the Nigerian Stock Exchange, which allowed Nigerians invest local savings in US Dollar instrument. This fund has outperformed projections on returns. SecTrust pioneered and was local adviser on the first global offering by a Nigerian bank through the issuance of Global Depositary Shares (GDS) to raise UD$50 million from the international Capital market. Afrinvest has acted as advisers on some of the largest and most significant transactions in the Nigerian capital market since 2005. Afrinvest is one of the most trusted advisory firms in the domestic corporate finance market, pioneering major innovations and providing leadership in the Nigerian Securities market. The Firm has advised on numerous landmark transactions including the first Eurobond Issue by a Sub-Saharan Africa Corporate (outside South Africa); the first ever simultaneous merger and tender offer transaction in Sub-Saharan Africa and the largest ever listing on the Nigerian Stock Exchange. Afrinvest has been ranked as a major Investment Research firm, which is at the forefront of playing instrumental roles in the introduction of new financing products such as Eurobonds and Global Depository Receipts to Nigerian Companies. Mr. Obaseki is presently the Chairman of the Board of Directors of the firm, which won the Best Asset Management Firm in Nigeria (2014) Award by the Wealth & Finance International Magazine Finance Awards. Economic engineer of Edo State In his native land, Obaseki served as the Chairman of the Economic and Strategy Team (EST) of Edo State until recently when he reigned to vie for the governorship of the state. He held the position of the EST chairman for over seven years starting from March 17, 2009. His key achievements as chairman of the economic team include: *Documentation of State Economic Development framework through Sectors’ Strategic Planning which is reviewed and updated on an ongoing basis; *Introduction and enculturation of retreats as a platform to ensure all parties engagement not only in planning and executing state development initiatives but also in monitoring and evaluation of outcomes; *N25 Billion Infrastructure Development Bond from the Nigerian Capital Market in 2010; *$225 Million Concessionary rates Development Loan from the World Bank with the 1st Tranche of $75 Million already accessed. 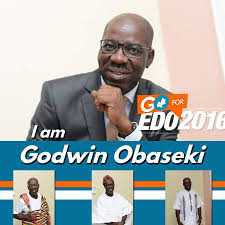 *Successfully hosted Sector based Economic Summits and Policy Dialogue Series including the Power Round Table in 2010, 2011 Education Round Table and 2012 Agribusiness Round Table. These summits have translated in measurable and desired outcomes including: Azura-Edo IPP project with over $1 billion in FDI currently under development in Ihovbor, Uhunwode LGA; Education Reforms, which have translated to significant improvement in educational infrastructure and student performance in WAEC and other examinations. Following the 2012 Agribusiness Summit, the state has attracted investment in the Rubber Sub-sector for the development of the single largest Rubber Plantation project in Nigeria in Sokponba in Orhiomwon LGA under a privately developed and financed initiative. A framework for Local Economic Empowerment through out-growers schemes is being finalised to attract funding into the development of key crops for which Edo State has natural endowment including Oil Palm, Rubber, Cassava, Cocoa, Rice and other grains. *Apart from the EST, Obaseki was in a number of other committees that constituted the live-wire of the Governor Adams Oshiomhole Adminstration. He was Chairman, member of the Tax Assessment Review Committee for Edo State Internal Revenue Service (TARC); Chairman, Committee on Micro, Small and Medium Enterprises (MSME); Chairman, Committee on the Implementation of the Law Establishing the Edo State University of Science and Technology, Uzaire; and Secretary, Committee on Contributory Pension Scheme. Others are: Member, Edo SEEFOR/DPO Steering Committee; Member, Committee on the Report of the Audit of the Credentials of Teaching Staff in Public Schools in Edo State; and Land Use Charge Committee; and Chairman, State Steering Committee on the European Union Assisted Niger-Delta Support programme (NDSP) Component 3 (Development of Edo State Water & Sanitation Policy and Law. Service at national level At the natioanl level, Mr. Obaseki served on the Presidential Committee on the Reform of the Nigerian Pension System; the Nigerian Securities and Exchange Commission Committee on the Re-activation of the Nigerian Bond Market and the review of the Investment and Securities Act. He served as a member of the Nigerian Stock Exchange Council between 2006 and 2009. Vast experience He also serves on the board of some companies such as Dorman Long Engineering Limited, Pillar Oil Limited, Seric Impianti International Limited. He was the founding secretary of a New York based US Africa Chamber of Commerce in 1992, which promoted US organisations doing business in Africa. He was a Director in Junior Achievement of Nigeria – the local affiliate of the worldwide Not for Profit organisation which trains students to appreciate market economy values. He also participates actively and serves as Trustee, in the Dr. Jackson Owen Obaseki Foundation, a family owned NGO