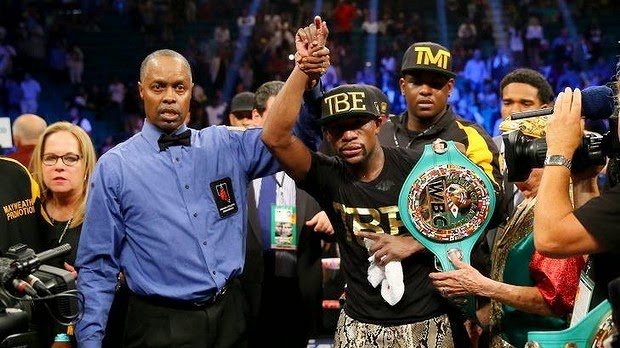 You still can't hit Floyd Mayweather Jr., but it turns out you can apparently bite him and trip him.
To no avail, of course.
At the end of this mess Saturday night at the MGM Grand, the three judges scored it, obviously, for Mayweather: One had it 115-112, the other two 116-111.

Not only did Mayweather win this fairly ugly welterweight title fight decisively before a near-sellout crowd of 16,144. His opponent, Marcos Maidana, ended up looking like a real villain.

In the eighth round, in a fight that Mayweather began dominating in the fifth, Maidana appeared to bite Mayweather's hand or wrist. Mayweather yelled in protest, referee Kenny Bayless stopped the proceedings to try to figure out what happened and it just served to further boost Mayweather's desire to make Maidana look bad.
Then, in the 10th round, Maidana tripped Mayweather flagrantly enough to prompt Bayless, on this night the hardest-working guy in the place, to deduct a point from Maidana. 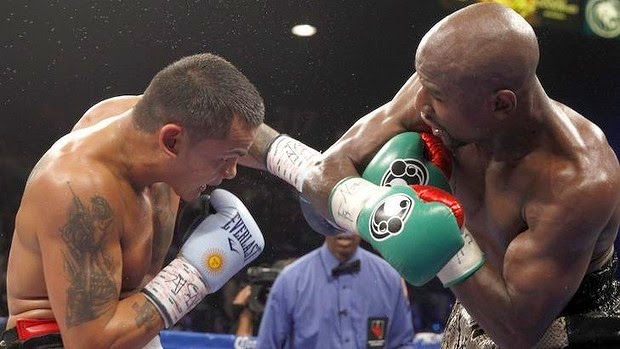 It had begun as yet another Mayweather matchup where the cat chases the mouse. And, as has been the case in his 46 previous fights, Mayweather, the mouse won. That left the man with the nicknames "Money" and "TBE" (The Best Ever), with a 47-0 record and another $32-million payday, not including pay-per-view revenue.
Maidana tried a similar tactic to his aggressive start, chasing Mayweather everywhere.
"I thought I won the fight," Maidana said. "He ran. I was the aggressor. Maybe judges like fighters who run."
Maidana won a couple of the early rounds doing that, but Mayweather was apparently just assessing how to handle all these bullrushes.
Once he did, he danced and jabbed and scored more and all that was left of Maidana was frustration.
Mayweather said afterward that Maidana had bitten his finger on his left hand.
"My hand is numb," he said. "I had to fight the rest of the way with my right hand.
"The key was, I didn't stay on the ropes. My dad (his trainer, Floyd Sr.) always tells me, hit and don't get hit. That's the way you survive in this sport."
Maidana denied the bite and offered, in his defense, his evidence: "Through the mouthpiece, I bit him? I'm a fighter, not a dog."
Mayweather said he thought he fought better in the fight here in May.
"I give myself about a C-minus," he said. "I got hit with shots tonight that I shouldn't have been hit with."
Compustats had Mayweather throwing 326 punches and landing 166; Maidana throwing 572 and landing 128.
So much was at stake for Mayweather. With each fight, that becomes more so.
The 47-0 record is huge for him. A legacy that should have included a mega fight, and maybe a victory, over Manny Pacquiao, now seems to rest solely with that unblemished career. He wants to be the Rocky Marciano of his era.
Heavyweight Marciano retired with a 49-0 record.
The MGM is building a new arena scheduled to open here in the spring of 2016. There is much talk about Mayweather opening the new facility with a big fight, and maybe closing his career at the same time-ideally for him at 50-0.
There is also talk that that would be the perfect time for the long-awaited Mayweather-Pacquiao bout. If the opening is, indeed, in the spring, that would make Mayweather 39 and Pacquiao 37. They could sell the title sponsorship to AARP.
Another Mayweather legacy is that, in a 47-pro-fight career that encompasses 363 rounds, he has been knocked down once. That was in 2001 against Carlos Hernandez, and while it was ruled a knockdown, it really wasn't. Replays showed that officials had made an error.
Against Zab Judah five years later, in a controversial fight at the Thomas and Mack Center here - in which trainer Roger Mayweather tackled somebody from Judah's corner and ended up being suspended, Mayweather actually got jolted and his glove touched down. But officials ruled it wasn't a knockdown.
In any case, neither was a memorable shot, and Mayweather can safely claim that he has seldom even been hurt. One of the few times he was, just for a moment, was in 2010 when Shane Mosley connected.
That was much more than Maidana did Saturday night. 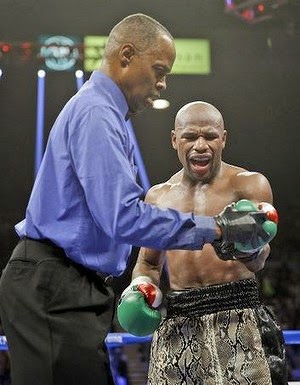