- August 03, 2014
The Cerutti Media Group is proud to announce to it's readers that Cerutti Mike Osagie is now an official
CNN iReporter.

What Reporters, Correspondents, and Broadcast News Analysts Do ?

Reporters, correspondents, and broadcast news analysts inform the public about news and events happening internationally, nationally, and locally. They report the news for newspapers, magazines, websites, television, and radio.
Cerutti Mike Osagie  (born May 29) is an Nigerian Lead Columnist , associate editor and non-fiction author. He has worked for Business World Newspaper since January 2014 as a reporter, and has now become an official investigative journalist for CNN iREPORT. 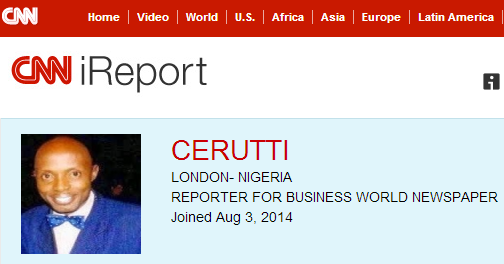 Additionally Cerutti  passionately continues to write books about Industry leaders who have and still influence today's society.
He has since written 3 books on  : American Billionaire Donald Trump, Nigerian Oil Tycoon Uche Ogah, and Nigerian politician,Chief Moshood Kashimawo Abiola. 1 of which have been bestsellers.