- December 03, 2013
Yes, 2013 BBC African player of year award has come and gone.The Ivory Coast and Manchester City midfielder, who had been nominated in each of the past four years, beat Pierre-Emerick Aubameyang, Victor Moses, John Mikel Obi and Jonathan Pitroipa to this year's crown.
The shortlist for the award was drawn up by 44 football experts across Africa, who based their choices on players' skill, technical ability, teamwork, consistency and fair play.
A record number of fans then voted for their favorite 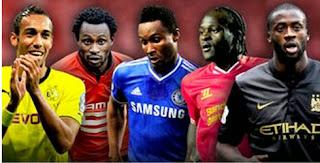 either online or by text message.
And those fans have considered Toure to be the standout African player over the past year, in recognition of the Ivorian's displays of power, pace, creativity and goals.
Toure said: "Thank you to all the fans around the world who continue to support me. It shows how much fans love you and appreciate your job as well.
But, BBC AWARD is not criteria to win African award.JJ Okocha once won BBC but missed out it African Award, the story will swing again this time around. 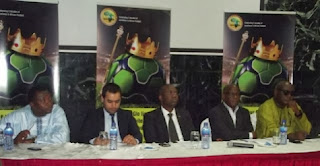 THE LIST FOR  AFRICAN FOOTBALLER OF THE YEAR
The Confederation of African Football have announced the list of the top-ten nominees for the African Player of the Year Award with Nigeria’s Mikel Obi making the list. Nigerian players: Mikel, John Utaka and Victor Moses were listed in the first long list of 34 players released last month by CAF before the cut.

Mikel has continued to run based on the strength of his winning the English FA Cup and the UEFA Champions League with Chelsea last season.

The African body also on Sunday released the names of the five players remaining in the run for Africa-based Player of the Year.

The statement from Cairo explained that the CAF’s Technical, Football and Media Committees decided on the current shortlists which will now be passed on to head coaches of each of the African countries and technical directors from CAF member associations whose votes will decide the eventual winners.

The confederation will announce the top three in the last week of November while the winners will be unveiled at a ceremony to be held December 20 in the Ghanaian capital Accra.

Mikel who has been on the international limelight for the past one week following the controversial English Premier League between his English club Chelsea and Manchester United becomes the first Nigerian to get that far in many years. The last time a Nigerian won the prestigious African award was in 1999 when Kanu Nwankwo of Arsenal swept aside other contestants. In 2003 Austin Okocha finished third behind Didier Drogba and Samuel Eto’o. The following year he rose to the second position behind Eto’o and then after that Nigerian players took the slide down the pole with Nigerian football generally.

Mikel is competing against his former teammate and one of the favourites Didier Drogba who also won the same trophies with Mikel. Drogba’s goals were very crucial in their European cup success last season. The other key contender is current champion Yaya Toure who won the English league title with Manchester City. There is also Christopher Katongo who led an unheralded Zambian side to the African title in February. 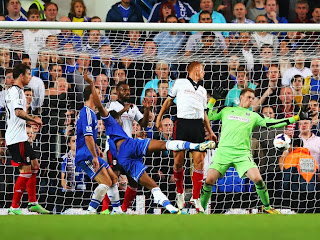 After waiting for seven years, the Super Eagles and Chelsea FC midfielder, John Obi Mikel, finally scored his first English Premier League goal against Fulham on September 21, 2013, Saturday, rapidly increasing his chances for the Glo/CAF African Footballer Of The Year Award billed for Lagos next year.

The fans in Nigeria celebrated the goal with frenzy, with some calling jokingly on the Federal Government to declare seven days holiday to mark the end of Mikel’s goal drought. It may sound amazing but that was the wish of Nigerian football fans.

Football pundits in Nigeria are of the view that Mikel should be rewarded with the 2013 edition of the Glo/CAF African Footballer of The Year Award by the Confederation of African Football (CAF), judging by his recent performances.

With a 2013 African Cup of Nations medal, the UEFA Champions League and EUROPA League medals to his credit, some believe that it is time Mikel was crowned the best player in Africa.

Since Stephen Keshi was named as coach of the Super Eagles, Mikel has been a regular, with his sterling performance on the field as an added advantage for him if CAF wants to look in that direction in giving him the award. Mikel’s five star performances at the Nations Cup was pivotal to ending Nigeria’s 19 years wait before winning the AFCON tourney in South Africa early in the year.

The Super Eagles had an abysmal performance at the 2013 Confederations Cup held in Brazil but Mikel, the former Lyn Oslo of Norway player, was on the scorer’s sheet in the 6-1 bashing of little known Tahiti.

There are three other players standing in Mikel’s way for the award and they are his compatriots, Emmanuel Emenike of Fenerbahce of Turkey, Victor Moses, who is on loan to Liverpool from Chelsea FC and Cote d’Ivoire’s Yaya Toure.

Therefore, Mikel has shown increase of his performance while Toure’s team were ousted from the Nations Cup, which makes it a lot easier for the Nigerian to grab the CAF award.
-courtesy: news.naij. 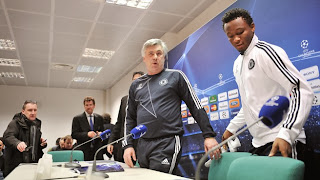 SUMMARY: Hand Mikel this award now, he has done better than all ten