- October 26, 2013
COPYRIGHT CERUTTI MEDIA, COURTESY TOURISM UNIT OF MALI
Often and on, manifold commentaries have been made about the wonderland called "Timbuktu" (or Timbuctoo or Tombouctou) and the name has always been   used in several languages to represent a far-away place but Timbuktu is an actual city in the African country of  Mali 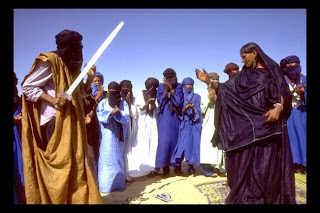 Indeed this is no doubt, the Home of the prestigious Koranic Sankore University and other madrasas, Timbuktu was an intellectual and spiritual capital and a centre for the propagation of Islam throughout Africa in the 15th and 16th centuries. Its three great mosques, Djingareyber, Sankore and Sidi Yahia, recall Timbuktu's golden age. Although continuously restored, these monuments are today under threat from desertification.
Located near the edge the Niger River during the rainy season (but about 8 miles from the river during much of the year), Timbuktu was founded by nomads in the twelfth century and it rapidly became a major trading depot for the caravans of the Sahara Desert.
During the fourteenth century, the legend of Timbuktu as a rich cultural center spread through the world. The beginning of the legend can be traced to 1324, when the Emperor of Mali made his pilgrimage to Mecca via Cairo. In Cairo, the merchants and traders were impressed by the amount of gold carried by the emperor, who claimed that the gold was from Timbuktu. Furthermore, in 1354 the great Muslim explorer Ibn Batuta wrote of his visit to Timbuktu and told of the wealth and gold of the region. Thus, Timbuktu became renown as an African El Dorado, a city.
During the fifteenth century, Timbuktu grew in importance but its homes were never made of gold. Timbuktu produced few of its own goods but served as the major trading center for salt trade across the desert region. The city also became a center of Islamic study and the home of a university and extensive library. The city's maximum population during the 1400s probably numbered somewhere between 50,000 to 100,000, with approximately one-quarter of the population composed of scholars and studentsmade of gold.
BRIEF HISTORY 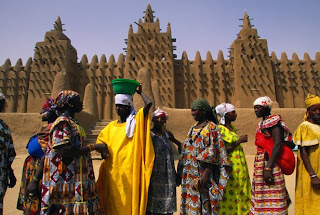 Located at the gateway to the Sahara desert, within the confines of the fertile zone of the Sudan  and in an exceptionally  propitious site near to the river, Timbuktu is one of the cities of Africa whose name is the most heavily charged with history.
Founded in the 5th century, the economic and cultural apogee of Timbuktu came about during the15th and 16th centuries. It was an important centre for the diffusion of Islamic culture with the University of Sankore, with 180 Koranic schools and 25,000 students. It was also a crossroads and an important market place where the trading of manuscripts was negotiated,  and salt from Teghaza in the north, gold was sold, and cattle and grain from the south.
The Djingareyber Mosque, the initial construction of which dates back to Sultan Kankan Moussa, returning from a pilgrimage to Mecca, was rebuilt and enlarged between 1570 and 1583 by the Imam Al Aqib, the Qadi of Timbuktu, who added all the southern part and the wall surrounding the cemetery located to the west. The central minaret dominates the city and is one of the most visible landmarks of the urban landscape of Timbuktu.
Built in the 14th century, the Sankore Mosque was, like the Djingareyber Mosque, restored by the Imam Al Aqib between 1578 and 1582. He had the sanctuary demolished and rebuilt according to the dimensions of the Kaaba of the Mecca.
The Sidi Yahia Mosque, to the south of the Sankore Mosque, was built around 1400 by the marabout Sheik El Moktar Hamalla in anticipation of a holy man who appeared forty years later in the person of Cherif Sidi Yahia, who was then chosen as Imam. The mosque was restored in 1577-1578 by the Imam Al Aqib.
The three big Mosques of Djingareyber, Sankore and Sidi Yahia, sixteen mausoleums and holy public places, still bear witness to this prestigious past. The mosques are exceptional examples of earthen architecture and of traditional maintenance techniques, which continue to the present time.
TIMBUKTU AND GLOBAL ATTENTION 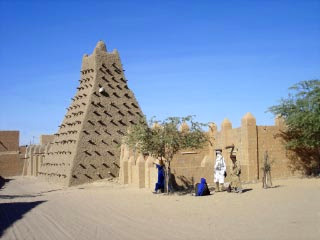 Today, the place is now one of Africa’s topurist gianst atration,but how did it all began? We learnt that it all astatrted when European explorers reached Timbuktu in the early 19th century. The ill-fated Scottish explorer Gordon Laing was the first to arrive (1826), followed by the French explorer René-Auguste Caillié in 1828. Caillié, who had studied Islam and learned Arabic, reached Timbuktu disguised as an Arab.
After two weeks he departed, becoming the first explorer to return to Europe with firsthand knowledge of the city (rumours of Timbuktu’s wealth had reached Europe centuries before, owing to tales of Mūsā’s 11th-century caravan to Mecca). In 1853 the German geographer Heinrich Barth reached the city during a five-year trek across Africa. He, too, survived the journey, later publishing a chronicle of his travels.
Timbuktu was captured by the French in 1894. They partly restored the city from the desolate condition in which they found it, but no connecting railway or hard-surfaced road was built. In 1960 it became part of the newly independent Republic of Mali.
Timbuktu is now an administrative centre of Mali. In the late 1990s, restoration efforts were undertaken to preserve the city’s three great mosques, which were threatened by sand encroachment and by general decay. An even greater threat came in 2012 when Tuareg rebels, backed by Islamic militants, took control of the northern part of the country. The Tuaregs claimed the territory, which included Timbuktu, as the independent state of Azawad.
No doubt, a trip to the dark continent of Africa, will not be complete without a stop at the great global heritage/sight called Timbuktu