Not so long ago, I have alerted in one of my several social network platform of my intentions to do an in-debt story on Chief Dr Uchechukwu Sampson Ogah,OON, in Uturu, Isikwuato Local Government Area of Abia State, Nigeria. Shortly after that promo and even till last night, not a few youths and elders from east and even in Diaspora America have been bombarding me to shoot-and shoot the piece now
The story of Dr Ogah is a classical grass to grace story. It is a typical Nigerians president, Dr Good luck Ebele Azikiwe Jonathan, GCON, a self confessed man who had no shoes at one time, but is today a Head of State and Commander-in-Chief of world’s most populous nation 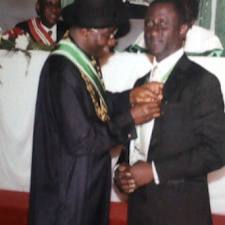 Dr Ogah’s story simply and forthrightly reminds one of the globally famous and evergreen quotations by Reverend Jesse Jackson the erstwhile America’s black Presidential candidate, at a historic Democratic Convention in New York. Thundered the black pearl: ‘’ All of us are not born giants, with silver spoons in our mouth and gold slippers on our feet. Some of are born short of hope, short of opportunity,abandoned,neglected,homeless, motherless, teeth crooked, eyes tangled, dream busted. But somebody has got to measure their greatness not by leaping up but by reaching out and loving and caring and sharing’’
That pathetic early life start of painted by Rev Jackson, best fits our subject matter of the day. For Dr Uchechukwu Sampson Ogah who was not born without any iota of gold or even bronze spoon took his destiny with his hands to emerge as one of the country’s prominent industrialist today
From  the rustic tranquility of his early youth, through the ever vacillating fortunes in today’s corporate world where he has his hands in  nearly a dozen different segment, he did not have a rosy beginning; but as a child of destiny, he set out to achieve the high goals he set for himself, generating from his slow and perilous rise to fame, which culminated in his ownership of mega brands companies ,with parent name simply known as MASTERS ENERGY GROUP, a conglomerate that has today giving birth to over a dozen  subsidiaries and interests spanning across oil & gas, banking, insurance, aviation, shipping, dredging, logistics, construction, travel agency, power, e.t.c, and thus along the line providing employment and lifeline for several thousand Nigerians and foreigners alike
A creative thinker, master strategist, somehow reclusive  , global minded and blessed with creative mind of geniuses like Bill Gate, Warren Buffet, Ted Turner, Donald trump and in Africa, men like Patrice Motsepe, Leo Stan Ekeh, Aliko Dangote among others , Ogah made national impact that shook many that never knew of his charitable side when,  in 2011, he solely bore the cost of transportation, accommodation, feeding and treatment of babies to India for Open Heart Surgery and other related diseases and the following year ,  sponsored a  couple of young men  to India for a major respiratory operation and also for fabrication of Prosthetics (Artificial Limbs) or Orthosis (Calipers) for so many disabled persons who ordinarily could not afford such things.
UCHE OGAH: PRIDE OF ABIANS, BUT MAN WITH DEEP PHOBIA FOR POLITICS
A recent stopover in Abia by this writer, showed in clear lights that this is the man to beat, if he decided to today aspire to any top political position, from Senate to Governorship, but he is said to have a deep phobia for the game of politics, rather his joy is born in consummate corporate world
In his Uturu Community, in the commercial state of Abia, we were told that Dr Ogah had single-handedly electrified villages, changed the landscape of a whole village by building prototypal houses for the entire community and has on several occasions offered free medical services for citizens of the community; and the state at large
Where other politicians are wanted to take, he gives, and note worthy of mentioned is the building a fully equipped modern hospital. His voice is to make primary education free by all means hence his erection and T rehabilitant of many primary schools in the eastern part of Nigeria, many with ICT Centre and modern facilities.
It was after he had succeeded in making a very meaningful impact in the primary segment that he moved a step forward to higher ground, as we learn, higher ground breaking educational foundation, tagged, Uche Ogah Foundation. The Foundation which is primarily for Empowerment, Poverty and Education in December 2011 gave out cash assistance of millions of Naira to empower less privileged Nigerians. He recently instituted a chair at Abia State University in honor of his late grandfather; and is building a gigantic auditorium in the university.
A highly reliable source hinted us that he is spending multimillion in helping people attain  their dream tom be educated because of the rough waters he passed was destiny was able to see him through, and which was why he maximized his opportunity
After his primary and secondary education, He attended the prestigious Institute of Management and Technology, Enugu where he graduated with distinction in Accounting at Higher National Diploma (HND) Level, and best faculty graduating student. He proceeded to University of Nigeria, Nsukka (UNN) where he obtained a Postgraduate Diploma. He also graduated with a Bachelor of Science Degree in Banking and Finance from Ogun State University and an MBA from University of Lagos.


He attended the prestigious Institute of Management, generating from his slow and perilous rise to fame and Technology, Enugu where he graduated with distinction in Accounting at Higher National Diploma (HND) Level, and best faculty graduating student. He proceeded to University of Nigeria, Nsukka (UNN) where he obtained a Postgraduate Diploma. He also graduated with a Bachelor of Science Degree in Banking and Finance from Ogun State University and an MBA from University of Lagos. He has attended many courses both at home and abroad.
Ogah did his National Youth Service at NAL Bank Plc. Thereafter, he took up full employment at All-States Trust Bank. From All-States Trust Bank, he joined Zenith Bank, a bank he worked and spent his banking career of over 10 years until he voluntarily resigned in 2007.  He received many commendations and awards as proof of his diligence and high performance. He set a record of growing a new branch from zero balance sheet to over N9 billion.  He rose to the position of an Assistant General Manager (AGM) in Zenith Bank before resigning.
Uche is a role model, leader, philanthropist, and go-getter, quintessential gentleman, who has given generously his time, expertise, and financial resources to make a difference in the life of others.

OGAH’S OTHER SIDE:” A TOP GRADE RECLUSE?
Not very much is known of his other side or how he unwinds, but very soon, CERUTTI MEDIA Group will be opportune to have extensive interview session with him, for now, all we gathered from close source is that he is somehow reclusive, he enjoy planning and very focus on his business, he does not go to club and socialize very much, one can be right to call him a recluse
A fan of his told us confidentially: ‘’ Ogah is a man that does not like parties and the small  talk and standing around that goes with it, he relishes using his time for constructive business’’ That also goes for his love for self discipline. This writer was told that discipline is something he leant from his father, the kind of man who stays the course during good times and bad, a man who push forward, then forward some more and never allows room for distractions

Apart from love for discipline, Dr. Ogah is a VERY strong Christian businessman, who started his intimate relationship with Christ in 1986, in Scripture Union, Enugu, where he gave his life to Christ as a student. He later joined Full Gospel Business Men's Fellowship International in 1987. He is a Field Rep in Full Gospel Business Men's Fellowship International. Ever since giving his life to Christ, Uche had not looked back in propagating the Gospel.  He has remained a pillar of support to many churches of Jesus Christ and Fellowships.
One other secret about him also is his love to promote young musical talent in gospel career. He is said to have contributed in no small way to lift one of his former top staff, Ebele the flutist, who was a dedicated accountant in his Master energy group, but who decided to quit the corporate world for her passion to serve God through her gospel efforts, perhaps all what the young lady has achieved could not have been possible without the philanthropic gestures and large heart of Dr Ogah