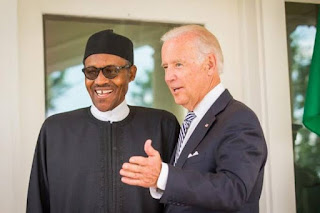 Biden and Buhari’s salaries and PR

What is President Muhammadu Buhari’s salary and that of his US counterpart Joe Biden? What are their extra incomes and how much taxes do they pay?

As the leader of the most influential country on the planet, US President Biden can claim the title of the most powerful man in the world. As the President of the largest black nation on earth, Nigeria’s Muhammadu Buhari can also claim to be the world’s most powerful black leader.

With such enormous responsibilities, they both deserve to be well paid. President Buhari and Joe Biden’s salaries, taxes and public relations should therefore be of great public interest. Here’s how they square up:

Presidents and their families usually do not receive or accept clothing as a “gift” from designers, like celebrities on the red carpet. If a piece is accepted as a gift, it is immediately housed in the National Archives after being worn.

President Muhammadu Buhari’s official salary is about N14 million, after graciously offering to take a pay cut on the assumption of office. The extra incomes made and taxes paid last year are not immediately available.

He also enjoys a wide range of presidential perks as disclosed by the Revenue Mobilisation Allocation and Fiscal Commission (RMAFC).

President Biden stays behind the news cycle rather than being at the center. (Unlike the Trump administration). That way he takes maximum advantage of the news cycles.

He has a sense of unity and also great at pulling people and nations together, as he did in the Russia- Ukraine crisis. This is a valuable public relations asset.

He is not trailed by past scandals and he projects the image of a trusted family man.

Biden’s willingness to work with a diverse group of people raises his personal appeal.

His PR strategy of “Do thyself no harm” might be boring, but it assures reputation safety.

He tends to blow hot and then cold on various public issues, leading to a communications dissonance in many instances.

The evacuation of Americans from Afghanistan was a public relations failure in both words and action. Poor intelligence report, underestimating the problem and mishandling the communications all added to poor PR for President Biden.

The Biden administration was forced to publicly admit that it miscalculated the pace at which the Taliban would take back the country, after previously expressing confidence in the Afghan military.

Biden first adopted the PR strategy of staying behind the news cycle:  rather than being at the center. While this kept him out of PR trouble, it also prevented him from controlling the PR narrative and maximizing the advantage of House majority.

The president is not doing cable news interviews. Tweets from his account are limited and, when they come, unimaginably conventional. The public comments are largely scripted.

He promised a “return to calm.”

The US inflation rate has hit its highest level in roughly 40 years. Economists have long debated over how much credit or blame presidents should get for the state of the economy and the pace of inflation.

Whether it’s fair or not to pin soaring inflation on Biden, his PR is taking a big hit from the inflation numbers.

According to the 2021 Corruption Perceptions Index reported by Transparency International, Nigeria is ranked 154 in the list of the most corrupt nations out of 180 countries in the world.

Despite the widespread corruption at all levels of Government, President Buhari has managed to maintain a reasonably good personal reputation.

President Buhari won the PR battle between Nigeria and Twitter. Getting tough on Twitter and shutting them down in Nigeria, earned him a great amount of positive media coverage

President Buhari has managed to control the narrative on most socio-political issues.

President Buhari has stayed to the carefully scripted key messages. Even when they lacked persuasion, he simply stayed disciplined with the message.

President Buhari made big promises to wipe out corruption, Boko Haram and insecurity. He scored poorly on all three fronts.

Public relations and communications thrive in centres of brilliance. It’s hard to pinpoint an area of policy or PR distinction in President Buhari’s governance.

Insufficient amplification of some of Nigeria’s successes has kept Nigeria’s external image at the low ranks and outshined by the likes of Ghana, Rwanda and Kenya.

Nigeria has great success stories internally and externally. But the story is not well told.

It would be hard to throw any corruption charges at President Buhari personally. But he has also not been transparent with his finances and his taxes like he was when he first took office.

Good intentions and deeds sustained over time are the ingredients of great PR.

On July 20, 2020, Buhari said: “I promise to bring to justice the killers of the five aid workers killed by Boko Haram and I pledge to wipe out the remaining vestiges of the insurgent group,”

Almost after every Boko Haram attack or kidnappers’ brazen strikes, President Buhari repeats the same promise to “leave no stone unturned and bring Justice to the book.”

Many stones are still waiting to be turned!

Now, who wants to be a President?

With all these perks on and behind the scenes, the scramble to be president will always remain a rat race.

Do you still want to be a President?

Exclusive piece is with Kind courtesy: