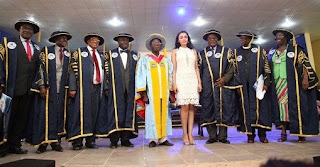 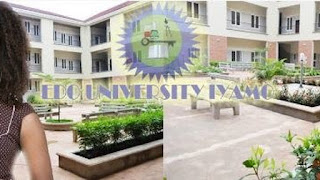 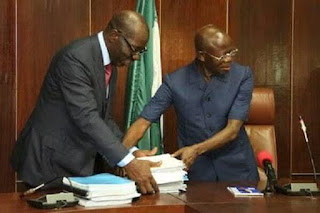 "Develop a passion for learning. If you do, you will never cease to grow. Anthony"-J. D'Angelo

With a clear cut the vision, the Edo University Iyamho, is o aspires is to become a top center of excellence in quality teaching, research, innovations and community development."

And today (March 23 2019) all roads will lead to IYAMHO for the 3rd Founder’s Day ceremony of Edo University Iyamho, scheduled to hold for today

In a position paper made available to WORLD LEADERS ONLINE MAGAZINE by the Registrar and Secretary to Council, Dr. Mrs. Isoken Ogboro, on behalf of the Vice Chancellor, Prof. Emmanuel Aluyor,  it stated that the 3rd Founder’s Day ceremony will take place at the Aliko Dangote Auditorium of the school. 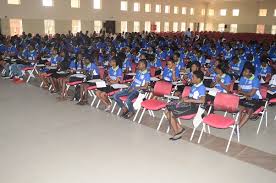 It added that the ceremony will feature a lecture titled “WATER SANITATION AND HYGIENE FOR SUSTAINABLE DEVELOPMENT IN NIGERIA”, which will be delivered by Engr. Suleiman Hussein Adamu, the honorable Minister of Water Resources.

It further stated that Prof. Eddy Erhagbe, Dean, Faculty of Arts, University of Benin will also be speaking on “DEMOCRACY AND MEETING THE NEEDS OF NIGERIAN CITIZEN: PANACEA TO TACKLING INSECURITY IN NIGERIA”.

It must be noted that The Edo University, Iyamho (abbreviated EUI) is a state government-owned tertiary institution founded in 2016. It is located in Iyamho, a town in Etsako West local government area of Edo State, Nigeria. On 23 March 2016, the university was approved by the National Universities Commission as Nigeria's 41st state university do State University offer undergraduate, postgraduate and research programmes.

OSHIOMOLE: MAN BEHIND THE VISION 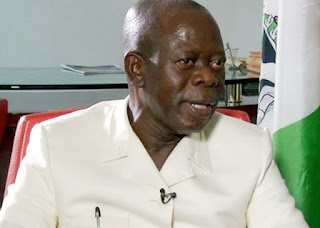 We can submit today that the idea behind the establishment of Edo University by the founding fathers is neither to replace nor compete with the existing Ambrose Alli University, Ekpoma.
But rather, to complement it in terms of providing world-class education with the best of infrastructure to academically-gifted students and the rich, who can afford the fees.
“People have questioned why former Gov. Adams Oshiomhole did not upgrade AAU, than establishing a new university altogether.
Edo University, Iyamho is a state government-owned tertiary institution founded in 2016 under Adams Oshiomole’s Goverment – after the Edo State House of Assembly passed a bill for the establishment of a University of Science and Technology at Uzairue the University was however changed to Edo University and its location to Iyamho

Adams Aliyu Oshiomhole, born 4 April 1952 is a former president of the Nigeria Labour Congress (NLC), turned politician who in 2012 was elected for a second term as the Governor of Edo State in Nigeria on the platform of the Action Congress.
Early Life and Education
Adams Aliyu Oshiomhole was born on 4 April 1952 at Iyamho, near Auchi in Edo State. He was born Muslim but was led to Christianity by his late wife Clara who died of cancer aged 54.
Adams Aliyu Oshiomhole is a Catholic and his Christian name is Eric. After his secondary education, he obtained a job with the Arewa Textiles Company, where he was elected union secretary. He became a full-time trade union organizer in 1975. He then studied at Ruskin College, Oxford in the United Kingdom where he majored in economics and industrial relations. He also attended the National Institute for Policy and Strategic Studies, Kuru. In May 2015 he married a young model named Lara Fortes.
Career
Adams Oshiomhole was appointed General Secretary of the National Union of Textile Garment and Tailoring Workers of Nigeria in 1982, a union with over 75,000 workers. After democracy was restored in 1999, he became president of the Nigerian Labour Congress. Early in the administration of President Olusegun Obasanjo he negotiated a 25% wage increase for public sector workers. In return he publicly supported Obasanjo and endorsed his candidacy when he was re-elected in 2003.
Adams Oshiomhole represented African Workers for two terms on the Governing Body of the International Labour Organisation (ILO), serving on the committee on Freedom of Association. He was also a member of the Executive Board of the International Confederation of Free Trade Unions.
In April 2007, Adams Oshiomhole contested for Governor of Edo State under the Action Congress Party, with which his Labour Party had entered a strategic alliance. Oserheimen Osunbor of the People’s Democratic Party (PDP) was declared the winner. However, the AC contested the election on the basis of various irregularities.
On 20 March 2008, an Edo State election tribunal nullified the election of Oserheimen Osunbor and declared Oshiomhole the winner. On 11 November 2008, a federal Appeal Court sitting in Benin City upheld the ruling of the state’s elections petitions tribunal, declaring Oshiomole to be the Governor of Edo State.
In 2012, he was elected to a second term, winning the elections in a massive landslide. He ended his tenure on November 12 2016 and two years later he was voted in as the APC chairman