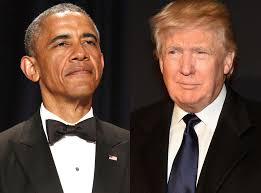 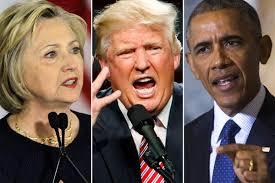 " The Trump,Obama new found love and trust has only just proved to us that in life, there can never ever be permanent  enemies "- Says best selling African wordsmith/fan of Obama& Trump-, Chief Cerutti Mike Osagie

Did anyone see it coming, the apparent new rapport between President Barack Obama and President-elect Donald Trump?
Just a few months ago, they were regularly flinging insults back and forth. Today they're trading phone calls and pleasantries.
Apparently, membership in one of the world's most exclusive clubs, the club of U.S. presidents, has a way of changing things.
On Wednesday, Trump talked about letting bygones be bygones.
"I've now gotten to know President Obama. I really like him," he said on NBC's "Today" after Time magazine announced him as its Person of the Year. "We have, I think I can say, at least for myself, I can't speak for him, but we have a really good chemistry together. We talk."
Trump continued: "He loves the country. He wants to do right by the country and for the country, and I will tell you, we obviously very much disagree on certain policies and certain things but, you know, I really like him as a person."
Obama hasn't been quite as effusive in his comments about Trump since the Nov. 8 election. But he has repeatedly urged the public and world leaders concerned about a Trump presidency to adopt a "wait-and-see" approach. His argument is that campaigning is different than governing, and that the reality of holding office will lead Trump to alter his thinking in some cases.
"That's just the way this office works," Obama said. 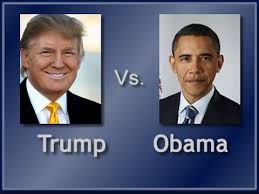 It's unclear how genuine a friendship may develop between two men who have little in common beyond the presidency, or whether it's just Obama exercising a little presidential decorum, leaving the past behind and showing his commitment to a smooth handoff to the next administration.
It's not the tone many expected just a few months ago. Obama spent much of the campaign almost gleefully denouncing the showy New York businessman as "temperamentally unfit" and "uniquely unqualified" to lead the world's most powerful nation.
Trump wasn't shy about responding, tweeting at one point that Obama "will go down as perhaps the worst president in the history of the United States!" Trump also spent years fomenting the "birther" issue, trying to undermine Obama with false claims that he was not a U.S. citizen and therefore an illegitimate president.
For that, Obama publicly humiliated Trump at the White House Correspondents' Association dinner in 2011, ridiculing his turn as host of a reality TV show and spreader of the birther theories.
White House press secretary Josh Earnest has acknowledged that Obama and Trump have had "at least a handful" of telephone conversations since their 90-minute Oval Office meeting on Nov. 10. But Earnest has declined to say what they talk about or characterize the relationship between them. He did say Trump initiated at least one of the calls.
Trump had said at the White House that he would likely be calling on Obama for his "counsel." Turns out it wasn't just bluster.
Paul Light, a New York University professor who studies government, says Obama could simply show Trump two photos, one each from Obama's first and final State of the Union addresses, to illustrate the "aging process" that is the 24-hour, seven-day-a-week presidency.
"What Obama can do for him is kind of help bring him up to date or help him understand what he's gotten himself into," Light said of Trump, who is 70. "Trump may be up to the task, but he doesn't know what the task is."
Ross Baker, a Rutgers University politics professor, said Trump may be sending a "message of reassurance that he is aware of his own limitations" by publicizing his outreach to Obama.
"There's no kind of handbook on how to be president," Baker said