ENTER THE PROLIFIC PROFILE OF RACHEL UMAHI:WOMAN WHO TIRELESS GIVES SUCCOUR TO THE POOR AND NEEDY 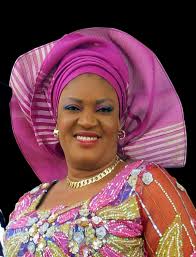 Some people see the art of giving to the poor and needy, exclusively spaced for the traditional end of year CHRISTMAS  PERIOD, here we see celebrities and some big multinational paying courtesy visit to the orphanage  home and giving to the disadvantages in our midst

To some, it is lifestyle, they give as way of life, no matter the period, in our usual style, CERUTTI CHARITY UNIT, in association with WORLD INDUSTRY LEADERS, presents the story of Chief Mrs. Rachel Umahi-a tireless giver, and wife of of Ebonyi Sttae Governor, Engr David UmAHI
The charity minded lady was born on 23rd March, 1972 to the family of Mr. and Mrs. Chukwu and Eunice Akpa (of Umuobuna, Uburu) in Kumba, Cameroun.
She attended Umuobuna/Uhuaba Community Primary School, Uburu between 1979 and 1985 from where she got her First School Leaving Certificate.
She proceeded to Immaculate Girls Secondary School, Aba from where she passed out after obtaining her West African School Certificate (WASC) in 1991.
Thereafter, she gained admission into the Rivers State University of Science and Technology (RSUST), Port Harcourt in 2002, where she obtained a Bachelor of Science (B.Sc.) degree in 2007.
She had several post-graduation experiences in human and resource management in the private sector, before she became the wife of the Deputy Governor of Ebonyi State between 2011 and 2015. 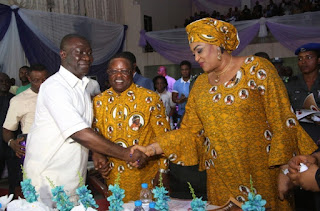 On assumption of office as the wife of the Governor following the successful election and swearing-in of her husband, Engr. Chief David Umahi as the Governor of Ebonyi State; Chief Mrs. Rachel Umahi engaged herself in numerous humanitarian and welfare services to the needy, by bringing succor and upliftment to various families across the state.
This, she undertook through her NGO, the “FAMILY SUCCOR AND UPLIFTMENT PROGRAMME”.
Through this platform, Her Excellency facilitates numerous social development programmes for Ebonyi women and children, particularly as it relates to primary healthcare and welfare programmes.
To further drive home her determination to improving upon the socio-economic status of Ebonyi Women and children, barely two weeks upon the swearing-in of her husband as the Governor, she embarked upon advocacy visits to several agencies and organizations such as the United Nations Industrial Development Organization (UNIDO), U. N. Women, W.H.O., Society for Family Health and other agencies and organizations to garner support and partnership for the successful actualization of her programmes on effective development of Ebonyi Women and children.
Chief Mrs. Umahi has not only distinguished herself through hard work and commitment to excellence in all endeavours, she is also a devout Christian, a caring mother in a million. 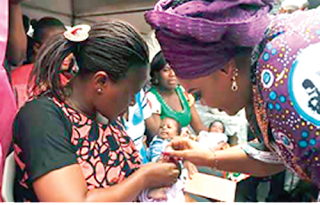 Her marriage is blessed with seven children.  She enjoys reading and travelling.