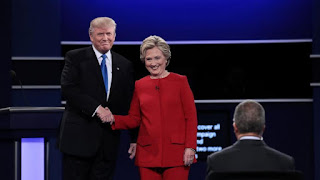 PHOTO CAPTION...
Hillary Clinton and Donald Trump walk towards NBC moderator Lester Holt at the end of the first presidential debate at Hofstra University in Hempstead

Democrat Hillary Clinton and her Republican White House rival Donald Trump went head-to-head on Monday night in a prime-time duel in front of tens of millions of American voters.
Here is a selection of key quotes from the first of three debates leading up to the November 8 election:
Stamina to lead?
"I said she doesn't have the stamina. And I don't believe she does have the stamina. To be president of this country, you need tremendous stamina" - Trump
"Well, as soon as he travels to 112 countries and negotiates a peace deal, a ceasefire, a release of dissidents... or even spends 11 hours testifying in front of a congressional committee, he can talk to me about stamina" - Clinton
The right experience?
"Let me tell you, Hillary has experience. But it's bad, bad experience" - Trump
Too much prep?
"I think Donald just criticized me for preparing for this debate. And yes, I did. And you know what else I prepared for? I prepared to be president. And I think that's a good thing" - Clinton
Your own reality
"I know you live in your own reality, but those are not the facts," Clinton said, after Trump took her to task over her support for the Trans-Pacific Partnership trade deal.
A racist lie 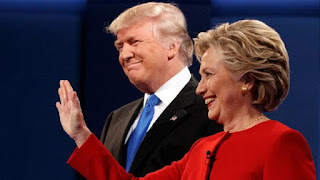 "He tried to put the whole racist birther lie to bed. But it can't be dismissed that easily. He has really started his political activity based on this racist lie that our first black president was not an American citizen" - Clinton, referring to Trump's longtime support of the "birther" movement questioning Barack Obama's citizenship.
Show you mine/Show me yours
"I have no reason to believe that he's ever going to release his tax returns, because there's something he's hiding" - Clinton
"I will release my tax returns against my lawyer's wishes when she releases her 33,000 e-mails that have been deleted" - Trump
Trumped-up economics
"The kind of plan that Donald has put forth would be trickle-down economics all over again. In fact, it would be the most extreme version, the biggest tax cuts for the top percent of the people in this country than we've ever had. I call it trumped up trickle-down" - Clinton
Talk the talk
"Typical politician. All talk, no action. Sounds good, doesn't work. Never going to happen" - Trump, rubbishing his rival's economic plans
World's policeman
"I want to help all of our allies, but we are losing billions and billions of dollars. We cannot be the policeman of the world, we cannot protect countries all over the world, where they're not paying us what we need" - Trump, reasserting criticism of long-standing US alliances.
Middle Eastern mess
"You look at the Middle East, it's a total mess, under your direction, to a large extent."
"You're talking about taking out ISIS. But you were there, and you were secretary of state when it was a little infant. Now, it's in over 30 countries, and you're going to stop them? I don't think so" - Trump
Shhh... don't tell the enemy
Clinton: "Well at least I have a plan to fight ISIS."
Trump: "No, no, you're telling the enemy everything you want to do."
Clinton: "No, we're not."
Trump: "You're telling the enemy everything you want to do. No wonder you've been fighting ISIS your entire adult life."
When it's all said and done
"I want to make America great again. I will be able to do it, I don't believe Hillary will. The answer is, if she wins, I will absolutely support her" - Trump