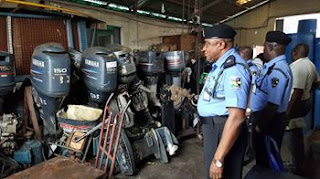 Understand, our police officers put their lives on the line for us every single day. They've got a tough job to do to maintain public safety and hold accountable those who break the law- BARRACK OBAMA
SPECIAL MARINE REPORT BY MIKE CERUTTI,IKOYI LAGOS

In this part of the world, where honors and accolades are hardly tendered, it was a thing worthy of commendation to see the Nigeria police, Marine/water way unit getting a loud pat on the back.
Yes, only just a few days ago. Supritendent of police (SP) Patrick Elah the Officer in charge of the marine, Lagos state police command and his entire team were honored in a most impacting ceremony which saw fast rising City Pride magazine management presenting a
certificate of commendation to the Marine unit for their  doggedness in battling crime and criminality in the Lagos water way.

According to the City Pride leader of delegation. Self confessed chief  Responsibility Officer  of the soft read, the effort of the water way police during the last Oworonshoki, helicopter crash was something worthy of commendation 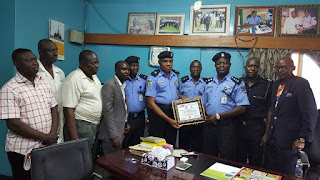 Speaking on his part Supretendent of police, and the man in charge of Police Marine Lagos SP Patrick Elah thanked City pride for the gesture and promptly dedicated the honor  the Lagos Commissioner of Police,CP Owoseni Fatai  for his encouragement and being on our toe all  time to discharge our duties effectively  and also his local Marine team

" No man or leader is an island. But for my team of officers at Ikoyi Marine unit, we will not get this honor. They are all tireless fighters hence our success all these years including the Oworonshoki  bristow helicopter crash and how we moved in promptly.
The SP Used the opportunity to call on well meaning Nigerians and corporate body to come to police marine aide
" We can't effectively fight water way crime if we are not effectively armed. We want support in bid to acquire new speed boats for till date 6 of our boats are grounded beyond repair
“I tell you combating water way crime is not a joke. Majority of our men hardly sleep or rest,we have to be constantly alert to fight this water hoodlums hence our appeal for support. As at today vast majority of our support comes from  the Lagos State  Trust fund but we believe industry leaders can come to police marine aide by helping us get new boats. Fighter machines and fueling. For only Nigeria police cannot do it 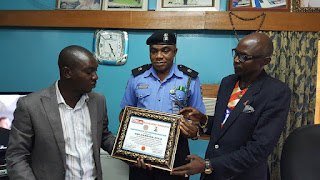 on his part. A Lagos based best selling writer global facilitator, a CNN ireporter.He and member of CITY PRIDE editorial board Young chief Cerutti Mike Osagie who accompanied the team to present the certificate of honor also commended the police marine unit and pledge to alert the world on the pathetic state of police water way unit with a view of writing dozens of letter of appeal to African billionaire donors and corporate body on need to see that the Nigeria police Marine unit is well equipped to fight water way crimes in our land"