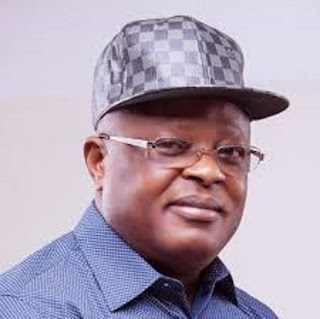 The Ebonyi State Governor, Eng. David Umahi,  has charged the newly appointed coordinators of  Development Centres in the state to evolve measures to combat kidnapping and other forms of violent crimes in their areas.
He told the 64 coodinators, including a physically challenged, at the Akanu Ibiam International Conference Centre in Abakaliki on Monday,   that anyone who failed to do so risked trouble with his administration.
“If  you allow kidnapping to take place in your development centre, either they take somebody from your development centre and go to another development centre, both development centres Coordinators are in trouble. You have to do so because you ought to know the bad people in your areas,” Eng. Umahi  said
The governor advised the Coordinators to eschew violence, but to close ranks with the stakeholders to sustain peace and development in their localities.
He warned them against all forms of discriminatory tendencies  and directed that efforts should be made to bring back all the strayed members of the Peoples Democratic Party to their original family which is the PDP.
Eng.  Umahi also ordered the Coordinators to within one month, recover all stolen funds and properties in your development centres from politicians and from civil servants.
“It is a must and after one month you have not recovered it, we will review our relationship with you,” he said,  stressing that his administration has no room for corruption.
He charged them to acquire land and engage in agriculture, adding that  the quantity of agricultural produce from  their areas would  be  be one of the parametres  for assessing  their performances.
The governor directed that “all  Coordinators are to ensure that every child of ours that is supposed to be in school must be in school.”
“ No child of school age in the state is expected to be seen loitering during school hours,”Governor Umahi stressed just as he challenged parents to make out time to attend to the academic needs of their children.
Eng. Umahi maintained that at least 20 percent of the total earnings of the Development Centres must be dedicated to project execution, which should be jointly carried out with the caretaker committee Chairmen of Local Government Areas.
He restated his determination to fulfil all his campaign promises, saying, “our determination is to keep our promises; the promises we made to people that stood with us during the turbulent period.”
Tendering an apology to those who worked for the Divine Mandate but had not been accommodated in the appointments made  so far made by him, the governor  reminded them  that  “everybody cannot be appointed at the same time.

But he  appealed to  them  to be patient.
In her reaction, the physically challenged person, who is  the Coordinator of Afikpo North Development Centre, Mrs. Ugochukwu Okoh, said she was very impressed with the governor for appointing her.
She  assured that she would  accord priority to agriculture in her Development Centre.