EBONYI GOVERNMENT MOVES TO BRING SUNSHINE TO HER WORKERS 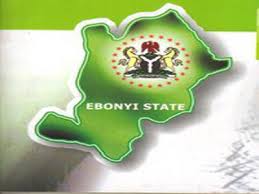 While many state in Nigeria are still struggling to pay a backlog of workers salary, Ebony- traditional state in eastern Nigeria is on verge of catching up all debt owed her civil servants, to this end, we can reveal that the  governor of Ebonyi State , Eng. Dave Umahia, has pledged that  he would direct  that the July salaries of workers be paid alongside those of June.
The directive came  barely a day to the commencement of  the  verification of the state’s  civil servants  in Abakaliki and other locations in the state.
“I will be directing the Deputy Governor(Barrister Kelechi Igwe) who is heading  the verification of workers  to ensure that July salaries are also added,” he  said  during the 21st priestly ordination of his Senior Special Adviser on Welfare and Religious Matters, Rev, Father Abraham Nwali at the St. Mathew Catholic Church, Ugwachare in Abakaliki.
Umahi, who was the special guest of honour, reiterated his desire not to reduce the salaries of workers and downsize the workforce.
He said: “On Thursday,I   was at the National Economic Council meeting in Abuja   and this issue of salary payments, especially those  of local government workers.
“I said  to the Governor of the Central Bank what I do  I do? A governor in the North said, ‘I have reduced my workforce’ and the other from the South-West said the same. But the CBN governor said there are two things you can do: ‘You either reduce their salaries or reduce the number of the workforce.’
“But I said, here in Ebonyi, we are not going to reduce the workforce and we are not going to reduce salaries of workers.”
Explaining  that paucity of fund  was hindering the   payment  of the wages   of local government workers in the state,  the governor restated his government’s determination to take the state to a greater level.
He  also announced  that plans were underway to organize Agric  and Teachers summits in the state.
According to him, the Agric summit for Rice farmers, would chart a roadmap on how to improve the Agric Sector in line with his administration’s policy of  restoring the glory of the state as Nigeria ’s food basket.
Governor Umahi also explained that the planned Teachers Summit would aid the revolutionisation of  teaching in the state and make the education sector a model for the nation.
Stressing that there was no going back on his earlier promise to return some schools to missionaries, the governor directed the Commissioner for Education , Prof. John Eke, to ensure the speedy completion of all arrangements leading to the handover before the next academic session.
The governor, who  showered praises on Nwali, was companied to the event by his wife, Racheal and members of the state executive council.
After  the event, he paid a condolence visit  to the family of the late, Senator Christopher Nshi in Abakaliki.
Recalling that he was aware of the period Nshi took ill  and  the efforts to  save his life. Governor Umahi, said the good thing was that he (Nshi) would be remembered for his contributions to the development of the state and the nation.
He prayed that God would grant the family of the  deceased the fortitude to bear the loss.
The governor also visited the Red Cross Motherless Babies Home in the  town where donated  cash  and presented the children with cakes .
He said the visit was his own way  of celebrating with the motherless   children  his birthday which was on Saturday. Governor Umahi thereafter prayed for the children.
EXCLUSIVE PHOTO CAPTION 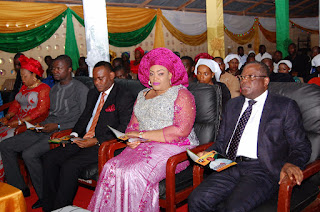 R-L;Ebonyi State Governor Dave Umahi; his wife, Rachael; Deputy Governor Kelechi Igwe; Speaker of the state House of Assembly, Francis Nwifuru and Commissioner for Commerce and Industry, Mrs Elizabeth Ogbaga at the 21st  anniversary of the ordination of the governor's Senior Special Adviser on Welfare and Religious Affairs  in Abakaliki on Sunday