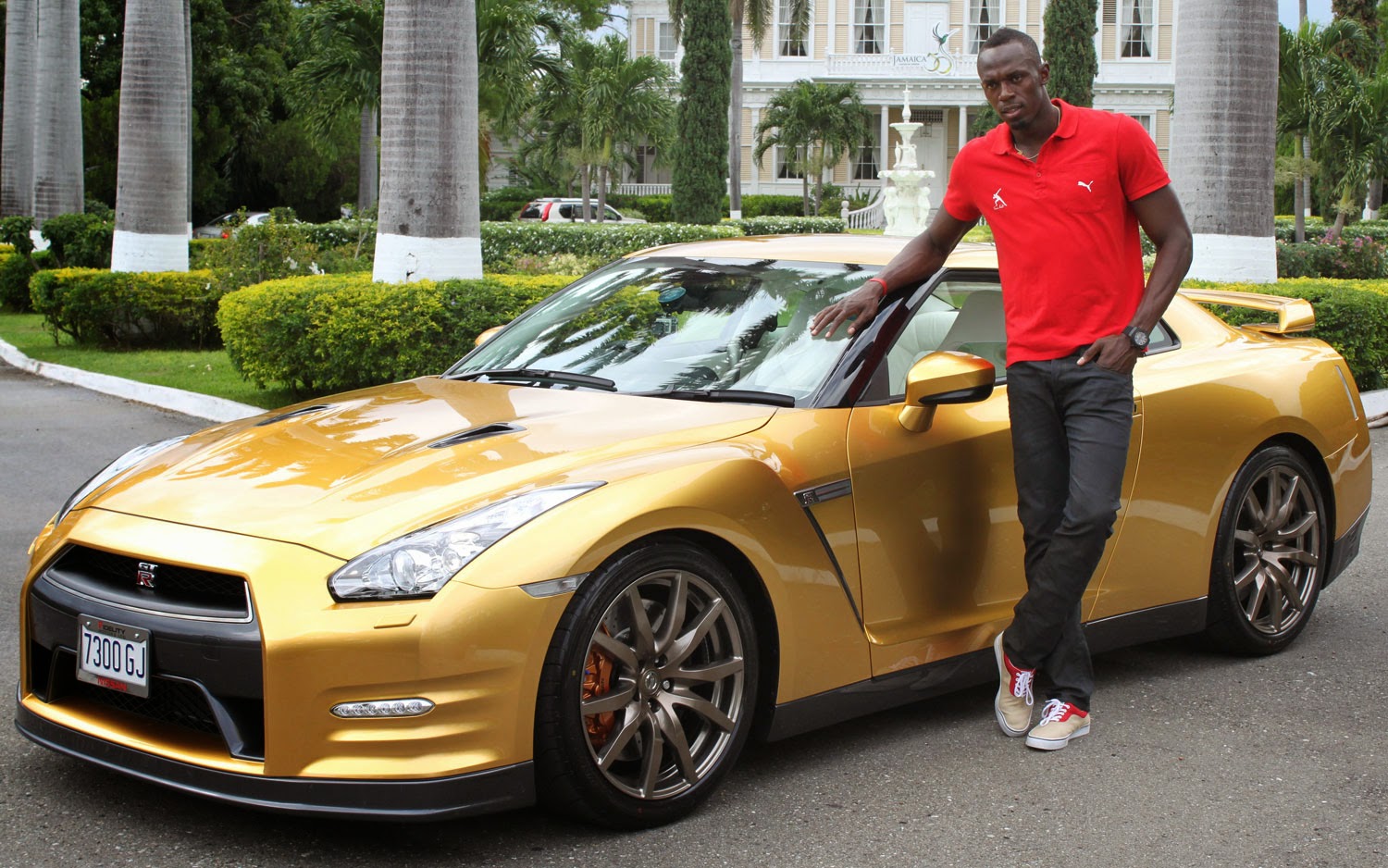 True enjoyment comes from activity of the mind and exercise of the body; the two are ever united.-Wilhelm von Humboldt

In continuation of our series on power of mind, and how to win big from within, brought to you, courtesy of BAYO FATUSIN FOUNDATION, we present the story of world’s all time great 100/200 meters athlete, Usain Bolt

Many see him win big and they are at lost, not knowing it is result of pure hard work. Before we talk more on Bolt, let us examined the Trojans from East Africa
Have you ever wondered why Kenyans tend to medal time after time in the Olympic Track and Field events (Current 2012 medal count: 14)? And why the athletes who train there often cross the finish line first in major marathons?
The answer may have far less to do with drive and determination—and everything to do with elevation.
“It’s due to the fact that winning athletes often live or train at altitude (Kenya's highest point is Mount Kenya) where the air is much thinner and their bodies have to work harder to run, lift, throw or jump,” says Bruce Kirk, a high-altitude training specialist who helped pioneer the concept of coaching Olympic-level gymnasts at 10,000 feet. “When athletes return to sea level after a stint at elevation, they’re significantly stronger and more powerful due to the increased mass of their circulating red blood cells.”
That effect only lasts around 10 days to two weeks, but that’s long enough to give most athletes the competitive edge in competition. As for the  rest of us? Well, very few regular guys (outside of the mountain time zone) are going to go jetting off to the Rockies to train for a month in order to see a boost in our performance—no matter how impressive that might turn out to be. The alternative for those of us in the rest of the world is to simulate the experience of working out at elevation by using high altitude training equipment.
BOLT: POWER OF PRACTICE
The year is still fresh, no big events at hand, yet, sensational triple Olympic and World Champion sprinter, Usein Bolt has already resumed training after an injury-hit 2014 season and proved he’s in shape for 2015 hostilities. 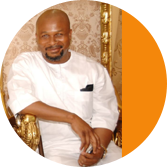 World 100m and 200m record holder Usain Bolt posted is share dynamite and Bayo Fatusin wants youths to learn from him|; ‘Always take your trade or career serious, be discipline and always practice or invest in whatever you do, learn from BOLT,and emulate his good virtues and in no time you can win big ion your line of calling’
It can be recalled that not so long ago, Bolt posted a picture of him on a leg press machine on Instagram with the caption: ‘New Year, Same Mission, Same Goals #workneverstop #ForeverFaster #2015’
Bolt only raced officially four times in 2014, including the Commonwealth Games in Glasgow where he anchored Jamaica to 4x100m relay gold.
Despite the lack of racing the Jamaican then managed in August 2014 to set a world indoor 100m record in Warsaw with a time of 9.98 seconds before ending his season prematurely to recover from a foot injury and train for his assault on the 2015 season. Big up Bolt 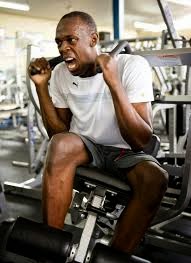 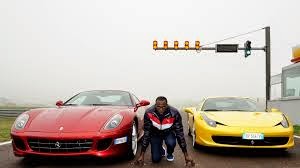 Usain Bolt, in full Usain St. Leo Bolt   (born August 21, 1986, Montego Bay, Jamaica), Jamaican sprinter who won gold medals in the 100-metre and 200-metre races at both the Beijing 2008 Olympic Games and the London 2012 Games.
Bolt, the son of grocers in Jamaica’s rural Trelawny parish, excelled as a cricket fast bowler in his preteen years. He developed a deep affection for the European football (soccer) teams Real Madrid and Manchester United, but his school coaches steered him toward track and field. Bolt first marked himself as a track prodigy at the 2002 world junior championships. In that meet, racing before a crowd of 36,000 in Jamaica’s National Stadium in Kingston, Bolt—just 15 years old at the time—won gold in the 200 metres, becoming the youngest-ever male world junior champion in any event. At age 16 Bolt cut the junior (age 19 and under) 200-metre world record to 20.13 sec, and at 17 he ran the event in 19.93 sec, becoming the first teenager to break 20 seconds in the race. However, hampered by a hamstring injury, he failed to advance beyond the 200-metre heats at the 2004 Olympics in Athens, Greece, and placed last in the 2005 world track-and-field championships final.
At 6 feet 5 inches (1.96 metres), Bolt defied the conventional wisdom that very tall sprinters are disadvantaged as fast starters. In 2007 he appeared newly dedicated to his training and earned a silver medal in the 200 metres at the world championships. He also persuaded his coach to let him try the 100 metres, and he ran 10.03 sec in his first professional race at the distance. On May 3, 2008, he lowered his best time to 9.76 sec, then the world’s second fastest mark. Four weeks later in New York City, Bolt broke the world record, running 9.72 sec to defeat world champion Tyson Gay.
At the 2008 Olympic Games, Bolt became the first man since American Carl Lewis in 1984 to win the 100 metres, 200 metres, and 4 × 100-metre relay in a single Olympics and the first ever to set world records (9.69 sec, 19.30 sec, and 37.10 sec, respectively) in all three events. His 0.66-sec winning margin in the 200-metre race was the largest in Olympic history, and his 0.20-sec edge over the second-place finisher in the 100 metres, despite beginning his victory celebration about 80 metres into the race, was the largest since Lewis won by the same margin. At the 2009 world championships, Bolt shattered his 100-metre record, winning the event final in 9.58 sec. Four days later he broke his own 200-metre record by the same 0.11-sec margin to win a second gold medal at the world championships.
Bolt was the heavy favourite in the sprint events heading into the 2011 world championships, but a false start disqualified him from the 100-metre final. Despite failing to medal in his signature race, Bolt recovered to capture golds in the 200 metres and the 4 × 100-metre relay, helping to set a new world record in the latter event. At the 2012 Olympics in London, Bolt defended his titles in the 100-metre and 200-metre events (setting an Olympic record in the former) to become the first person to win both races in consecutive Olympiads. In 2013 he won three gold medals at the world championships (100 metres, 200 metres, and 4 × 100-metre relay).
Bolt published a memoir, My Story: 9:58: The World’s Fastest Man (written with Shaun Custis), in 2010. It was expanded and reissued as The Fastest Man Alive: the True Story of Usain Bolt in 2012. – (Profile Courtesy ENCYCLOPAEDIA BRITANNICA) 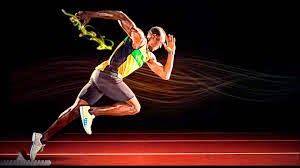