A GLOBAL EXCLUSIVE REPORT, BY CERUTTI  OSAGIE,07042631895
‘’It is fatal to enter any war without the will to win’’, *General Douglas MacArthur, US army commander
If the people of any nation lives in fear over the presence of one terrorist group or another tormenting her, that nation suffers severe shortage of potential investors or tourist absorbed to come and sight see and spend their hard earned money, therefore the strength of a war against such terrorist group waged without monetary reserve in as transitory as a breath….. a vain pursuit.
It is thus not strange that our subject matter today is based on the current and near endless book Haram insurgent hitting the giant of Africa like a hurricane deferring all weather obstacles to make an important landing, for nearly every week, Nigerians now wakes up to read in papers that the terrorist group have attacked (bombed) one city or the other
The President, Dr  Goodluck Ebele Azikiwe Jonathan, GCFR, BNER, GCON have fired a first salvo, declaring interest to seek a $1billion  loan to crush the book Haram insurgent, good move. In same vein The Chief of Army Staff, Lt. General Kenneth Minimah, recently divulged how the army is spending big to motivate the army, confessing that “It is only the Nigerian Army that pays operational allowances upfront. We paid that of July in June, As I talk to you, troops operational allowance for the month of August are being paid and that is how it has always been.
These are very inspiring news, but someone must let out the gospel truth that waging war and smiling home to  victory goes beyond splashing big budget with a massive war chest. In a May, June 1984 position paper by Duke Li Ching of Wei, in Business Review, it was revealed that the art of   war are first, measurement of space, second, establishing of quantities, third calculation; fourth, comparison; fifth, chances of victory. Duke Ching went on to conclude thus a victorious army wins its victories before seeking battle, an army destined to defeat fights in the hope of winning.
The big question now is that one must ask is, is the vast majority of Nigeria army willing to win? Are they absolutely motivated beyond money? Not so long ago, a no less military hard nut,  chief of army staff Lt Gen Kenneth Minimah ,himself  publicly admitted that large numbers of soldiers are deserting the force because they are afraid of the threat posed by terrorist sect Boko Haram.

Over the last 10 years, Nigeria's military has been battling Islamic insurgents in the north of the country but over recent years, Boko Haram has gained the upper hand. Armed with sophisticated equipment like rocket launchers, armored personnel carriers, heavy machine guns and anti-aircraft missiles, Boko Haram has had the better of the Nigerian Army lately.
In addition, their fighters appear to be more motivated than Nigerian troops and they also have better intelligence because they have successfully infiltrated the military. This has led to several successful ambushes whereby they have caught the Nigerian Army unawares, killing scores of soldiers in the process. Faced with such overwhelming odds, soldiers have been deserting their duty posts, with several just abandoning their equipment and fleeing, this is most pathetic actions of such soldiers, and the general admitted many of such cowardly soldiers have just showed the world that they joined the force for the wrong reasons.
MOTIVATING OUR SOLDIERS AS HORSES: THE UNITED ARAB EMIRATE VICE PRESIDENT FINDINGS
In advanced nations like United States of America, Britain or in some Arabs nation, soldiers are often ready to put their lives in front to safe guide their Countries and the Nigeria government can take a cue from His Highness, Sheikh Mohammed bin Rashid Al Maktoum, the United Arab Emirates Vice President / Prime Minister and Ruler of Dubai who spoke glowingly on positive and negative energies of life, and no doubt Nigeria army and her government can learn one or two tricks to motivate our soldiers against Boko Haram warriors 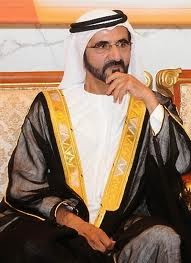 In his new international classic book, titled: MY VISION, challenge in the Race for Excellence, His Highness, Sheikh Mohammed bin Rashid Al Maktoum, recalled thus: During those rare times when I enjoy some moment of relaxation, if  I am  not riding horses, I am passionately watching them. Few years ago, I noticed an amazing feature of this astonishing animal: if horses are fed the same way, trained in the same monotonous manner, are often shouted at and are not encouraged by their keepers, they will start to decline and lose their energy


If this is the case with horses, what would happen to human beings if they are treated this way? When employees are unhappy with prevailing situation at their workplace, such as slow and monotonous pace of their work, or lack of direction and quality management from their superiors their moral will deteriorate, their work will suffer and their performance will decline. If the opposite is true, all will be fine.


Employees and people in generally are usually frustrated because they feel insecure, are mistreated, given false promises, see their hopes dashed, suffer boring routine and poor support services and have to face repeated blames, bias and injustice. Some mangers stifle the potential of their employees, prevent them using their initiative and bully them. Others give their assistants free rein to treat employees harshly, therefore deprive them of all opportunities to show their talent and efficiency and consequently, from getting promoted


Such behavior is unacceptable because it leads to frustration, which is an illness just like all other illness. This is an illness that has a cure. Nevertheless, before prescribing any medicines, the manager must make sure that his managerial policy is not reason for frustration.
Today, using the UAE VP’s horse finding analyses in comparison with the hitherto less motivated Nigerians army, one must ask how many Nigeria army senior officials have inhibited the potential of the average soldier that is often called to go to the war front and driven them to despair? How can the Nigerian soldier work without an adequately motivated workforce? How can we make the average soldier to go to the Boko Haram battle front with all boldness of a horse on race course or battlefield and expect them to gain their pioneering status and achieve victory over the rampaging terrorist under such circumstances?
And while still shedding light on the proposed $1 billion loan to fight terrorism, by the Federal Government, we must still not forget the other findings of His Highness, Sheikh Mohammed bin Rashid Al Maktoum that the secret behind a nation’s greatness do not lie in it military clout as contemporary history is littered with with examples of nations made powerful by  their military forces but which in reality,are Nations with small military forces that are economic superpowers.Nation can only overtake other nations through economic and not military power, as testified by historyWe wish the Nigeria army under the able leadership of Chief of Army Staff Lt Gen Kenneth Minimah all the very best as they move to crush the deadly Boko Haram
Chief Cerutti OSAGIE CAN BE REACHED@youngchief@yahoo.com  for strategic advice